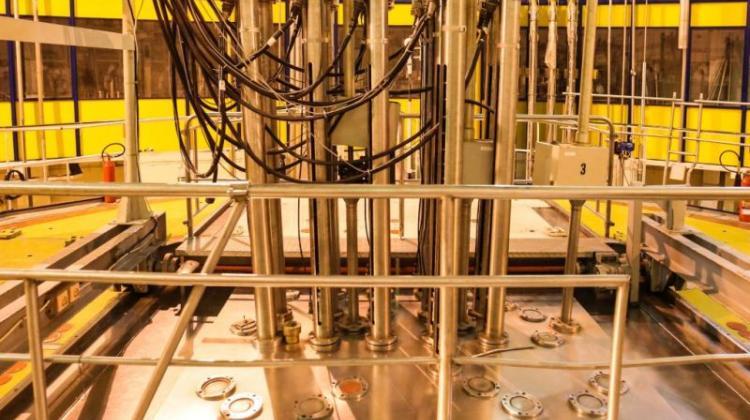 A Polish PhD student is looking at ways of efficiently producing Molybdenum-99, the most important isotope used in nuclear medicine.

RadFarm PhD student Tobiasz Zawistowski is building an experimental station for the production of 99Mo with an electron beam from a linear accelerator at the National Centre for Nuclear Research.

Molybdenum-99, which undergoes nuclear decay to technetium-99m, is the main isotope used in nuclear medicine. It is obtained primarily in nuclear reactors, such as the Polish research reactor MARIA at the National Centre for Nuclear Research in Otwock-Świerk. But the nuclear reactor-based method of producing this isotope has significant limitations.

Zawistowski said: “The key nuclear reaction leading to molybdenum-99 production is the emission of a neutron by Molybdenum-100 nucleus in the target material, induced after absorbing the high-energy photon that hits the target.

“The photon beam necessary for this nuclear reaction is produced as a result of inhibition of accelerated electrons on the atomic nuclei of a conversion target.”

Previously, Zawistowski was an intern at CANADIAN ISOTOPE INNOVATIONS Corp. (CII) and carried out experiments at Canadian Light Source (CLS) (https://www.lightsource.ca/). His internship supervisor was Mr. Mark de Jong, Chief Technology Officer at Canadian Isotope Innovations Corp. The internship, supported by RadFarm, allowed the Polish PhD student to participate in an experiment carried out at CLS as part of the IAEA project. NECSA researchers from South Africa were also involved in it. The PhD student will use this experience in conducting the actual molybdenum-99 production process while preparing his experimental stage of research at the National Centre for Nuclear Research.

He said: “In the experiment carried out at CLS, irradiation of the target containing molybdenum-100 took place in a linear electron accelerator with 35 MeV beam energy.

“The National Centre for Nuclear Research is currently building an accelerator with 30 MeV beam energy, which is very similar to that at CLS Laboratory. I intend to perform the experimental part of my PhD project mainly with the help of this Polish device.”

With Canadian scientists and colleagues from South Africa, he participated in an experiment exploring the possibility of obtaining high specific activity of the material containing molybdenum-99. The Canadian Light Source linear accelerator is located in an underground bunker. It is surrounded by tons of concrete, lead and polyethylene plates, protecting researchers from radiation.

The scientists are still working on the findings but the preliminary results indicate that the method works and it will be possible to use it in the event of a temporary reduction of production in reactors, which happened in 2008. The accelerator-based molybdenum-99 production method used on a larger scale could turn out to be cheaper. It also generates less radioactive waste.

The RadFarm project 'Radiopharmaceuticals for molecularly targeted diagnostics and medical therapy', which is co-financed by the European Social Fund under the Operational Program Knowledge Education Development 2014-2020, is implemented by a consortium of four units: two research institutes (the National Centre for Nuclear Research and the Institute of Nuclear Chemistry and Technology) and two universities (the University of Warsaw and the Medical University of Warsaw).