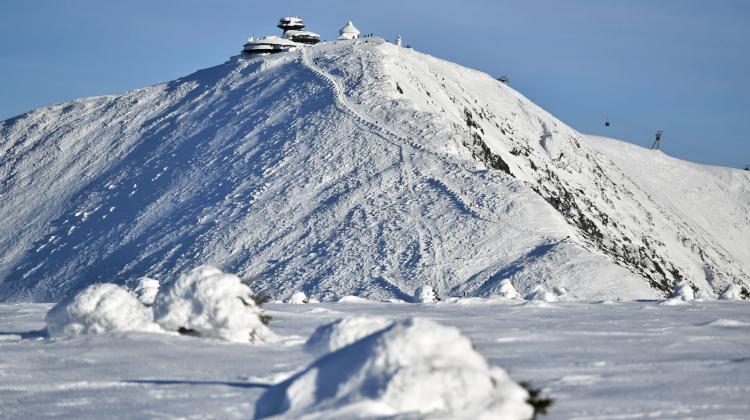 Meteorological measurements have been conducted on Śnieżka for almost 140 years. It is the location of the High Alpine Meteorological Observatory of the Institute of Meteorology and Water Management, one of two such facilities in Poland. The other is located in the Tatra Mountains, on Kasprowy Wierch. The characteristic building of today`s observatory, consisting of three connected discs, was built in 1974.

In February this year, meteorologists on Śnieżka recorded 228 cm of snow. This thick snow cover has persisted since the New Year. "It is definitely the most snowy winter in the Giant Mountains in 10 years" - says the head of the observatory Piotr Krzaczkowski.

Last year, the snow cover on the highest peak of the Giant Mountains exceeded one meter, and in the earlier years there was even less snow. "Earlier, there was more snow in 2005, in March of that year there was a 247 cm snow cover. March is the month when Śnieżka has the most snow" - says Krzaczkowski.

This year there is so much snow on Śnieżka that in January the employees of the observatory had to enter the building through the window, because it was impossible to clear the front door.

The meteorologist adds that on the highest peak of the Giant Mountains snow can persist even until the end of May. "But in recent years, when we had virtually no winter, it was possible to drive a car to the top of Śnieżka on the first weekend of May" - he says.

This year, in the Polish part of Giant Mountains, there was a high, third avalanche danger level. The Czechs announced fourth level in January. "The danger is highest when the snow cover consists of different layers. This was the case this year - underneath there was ice or hard rime, and on the top - fresh or drifted snow cover" - says Krzaczkowski.

Persistent thick snow cover in the Giant Mountains may result in floods in the foothill areas. Forecasting whether this year`s large snow masses may cause flooding is very difficult. "It depends on how fast this snow will melt. On sunny days, the snow melts relatively slowly. The problem occurs on warm days with rainfall and foehn winds. Then the snow cover melts very quickly and the Jelenia Góra Valley can be in danger of flooding" - says the head of the observatory.

"The most severe" winter in 10 years in the Giant Mountains was preceded by the warmest year in this mountain range in 100 years. "There were no extreme temperatures last summer, but the average annual temperature was high" - says the meteorologist.