Parasites can fool the defence mechanism of plants 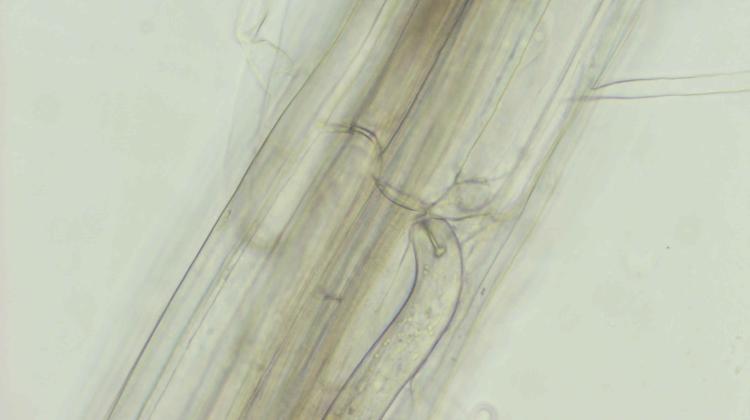 To defend themselves against pathogenic organisms, plants produce free radicals in their cells, or reactive oxygen forms. Some plant parasites, however, can use this mechanism for their purposes. Modification of individual genes could allow plants to defend themselves more effectively, according to a study conducted with the participation of Polish researchers.

Joint research under the supervision of Prof. Florian Grundler and Dr. Shahid Siddique has been conducted by researchers from University of Bonn in Germany, SGGW-WULS in Warsaw, Polytechnic University of Madrid, and the University of Dinajpur (Bangladesh). Their results are published in the latest issue of "Science Signaling".

"Until now it was commonly believed that the plant producing free radicals effectively defends against parasites and pathogens, and the more free radicals are produced at the site of infection, the more effective the defence. This publication shows that the oxygen free radicals produced by certain plant proteins can also stimulate the infection and increase plant’s susceptibility" - commented Dr. Mirosław Sobczak from the Department of Botany, SGGW-WULS in an interview with PAP.

Dr. Sobczak and Dr. Elżbieta Różańska of SGGW-WULS performed microscopic studies for the project. "We described how nematode (beet cyst nematode) infects plant roots, how the nematode nutrition structure develops, the differences compared to control plants. We observed the differences in defensive response to infection" - explained the researcher.

According to Dr. Sobczak, nematodes, including beet cyst nematode (Heterodera schachtii), are commonly occurring parasitic soil nematodes that attack roots of brassicaceae, beet, potato, tomato, carrot, even cereals. They are almost invisible to the naked eye, and completely harmless to human health, but they cause yield losses. For example, they cause decrease of sugar content in beet roots.

The researcher explained that nematodes cause the plant root cells to coalesce with each other to form a large structure, from which the nematode obtains nutrients. Resistant plant has a mechanism to identify the parasite and initiates a defensive reaction: it begins production of free radicals, which should cause the death of plant cells affected by the parasite.

"This is a universal defence mechanism occurring in plants. Plant kills the cells, because from its point of view it is more advantageous than permitting the parasite to feed on nutrients produced by the plant for several days" - explained Dr. Sobczak. He added that this mechanism, called a hypersensitivity reaction, is also triggered when the plant detects infections, fungi, bacteria or viruses.

In most cases, this mechanism is very effective, because pathogens produce structures whose task is to infect plant cells. Their development consumes a large portion of their energy reserves. If an infected plant cell dies, the pathogen often no longer has sufficient energy reserves to attack another cell. The situation is similar in the case of infective larvae of nematodes.

" It is generally believed that plants susceptible to infection with a specific pathogen do not have a mechanism that would allow them to recognize a pathogen, or they are not able to initiate an effective defence reaction" - said the scientist. He added that infected susceptible plants often produce free radicals around the site of the infection, but they are associated with cell response to mechanical damage caused by the pathogen.

"We wanted to make the cyst +happy+, i.e. find genotype of a plant that would not generate free radicals at all to give the parasite better than natural conditions of infection and development. However, this theoretically +ideally optimum+ plants for nematode enabled the development of a much smaller number of nematodes, and so they proved to be more resistant to nematode infection than wild genotype that produces free radicals. Therefore it appears that to produce a functional and stable nematode nutrition structure, activity is essential of certain specific proteins, which produce free radicals and stimulate the immune system of plants, but these free radicals are produced in such quantities or in such places, that their activity does not lead to cell death, but allows to transform cells into efficient nourishment structures" - described the researcher.

He explained that beet cyst nematode can control potentially dangerous vegetable proteins and use their products to increase the effectiveness of its own growth and reproduction. "It is believed that the mechanism of controlled use of free radicals in susceptible plants to increase pathogens growth efficiency is very common and widely used by other pathogens, such as fungi" - commented the researcher.

For now, the study was performed on arabidopsis, a model plant (Arabidopsis thaliana). However, if the mechanism of interaction with parasite is confirmed in cultivated plants, production of plants resistant to nematodes can be considered. "Research shows that in order to make plants resistant to nematodes, we would only need to mute or mutate single genes. This would be enough to transform plants susceptible to attack by pests to resistant ones" - said Dr. Sobczak.