The Polish Academy of Sciences scientists forecast: In a few decades, 75 percent trees may disappear from Polish forests 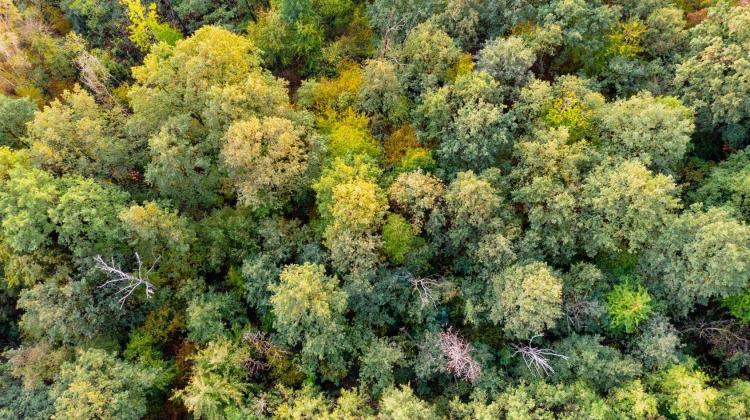 Today`s 30-40-year-olds may live to see the times when 75 percent trees have disappeared from Polish forests, and with them hundreds of species of other plants, as well as mushrooms and animals, scientists from the Polish Academy of Sciences forecast in a study sent to PAP.

One of the issues currently studied by scientists is the global climate crisis. Its consequences include extreme weather phenomena, unprecedented unhealthy high local temperatures, long periods of drought, desertification and disappearing species.

There is a consensus among scientists that human activity is the major cause of the current climate crisis. Meanwhile, the concentration of CO2 in the atmosphere is rising steadily.

A group of scientists from the Polish Academy of Sciences is wondering how to mitigate the effects of the climate crisis in Poland and protect native natural resources from destruction.

They remind that Poland`s forest cover has been increasing since the end of World War II; currently it is almost 30 percent of the country`s surface. However, they emphasize that not every forest renewal will bring the expected results, because climate changes that follow a highly probable but moderate scenario will significantly change the flora in Poland.

Researchers explain that there are tree species that will survive: silver fir, common beech, common ash, pedunculate oak and sessile oak. There are also species that will become much rarer in Poland: Scots pine, Norway spruce, European larch and silver birch.

"This is shocking data considering that pine accounts for 58.5 percent, birch for 7.5 percent, and spruce for 6.4 percent forest area in Poland" - scientists alarm. The analyses of scientists from the Polish Academy of Sciences show that in the perspective of a dozen years or a few decades, tree species, which today constitute the main component of tree stands in nearly 75 percent of their surface area, may disappear from Polish forests.

"The destruction of hundreds of species of fungi and animals will follow. Our nature will change significantly. This is an alarming, but highly probable scenario" - they note. "We must do all we can to ensure that this gloomy scenario is as mild as possible. One of the urgent measures that will reduce its severity will be planting tree species that are well adapted to the anticipated climate changes. The Polish Academy of Sciences declares its readiness and willingness to take on the role of the scientific consultant of this program" - the scientists write.

According to the scientists, foresters are already rebuilding forests in Poland as part of sustainable forest management and this could be a prescription to counter their vision. In place of pine or spruce stands growing on fertile habitats, they introduce, for example, oaks, beeches, lindens and maples - tree species for which these habitats are optimal.

Researchers also analysed annual plantings made by the State Forests in the form of 500 million trees. As they write, these are now almost exclusively renewals, trees planted in place of the ones that have been cut down. In addition, around 300 million trees are planted every year in other areas.

According to scientists, this method of afforestation will not significantly affect the surface area of forests in Poland or the level of carbon stored in trees. "When we cut large trees and remove them from the forest, and replace them with young trees, in total there is less wood storing carbon dioxide in the forest" - they note.

The professors also emphasize that there is a fundamental difference between increasing the number of large trees in Poland by 500 million and planting 500 million young trees from forest nurseries, because only a small part of them will reach maturity.

They also pose the question: "Is there enough space in Poland for 500 million new trees that will reach their biological maturity?" However, they see the solution to this dilemma. As they write, it is possible to afforest about 2 million hectares of the poorest soils and mountain areas, especially in the catchment areas of the most important Polish rivers. In their opinion, this would also improve flood safety.

"This way, we would achieve forest cover of approx. 11 million ha in Poland and in practice we would increase the CO2 storage potential of our forests by at least 10 percent. The proposed 500 million large trees would allow to increase forest cover in Poland to approx. 35 percent" - they conclude.