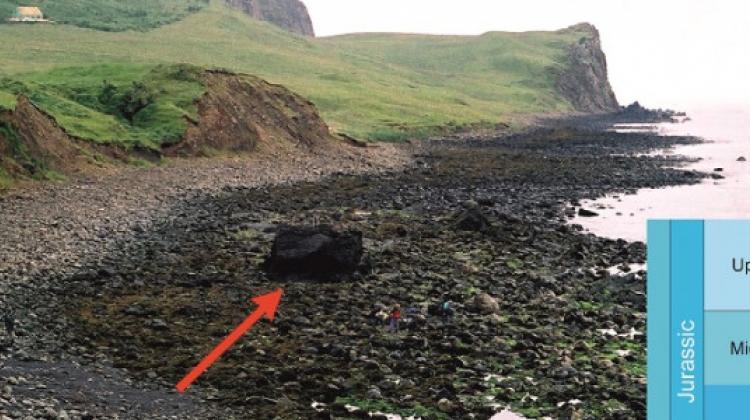 The geological boundary between two stages of the Jurassic period has been discovered in Scotland by an international team of researchers led by scientists from the University of Warsaw.

The location, the most representative site on Earth for the boundary of the Oxfordian and the Kimmeridgian stages of the period, will be marked with a ‘Golden Spike’ which is used to mark places of special historical and geological value for the planet - Global Boundary Stratotype Sections and Points (GSSPs).

Dr. Barski said: “Each field of science strives to create definitions. In geology, one of the defining concepts is the geological boundary. We are proud to have contributed to the systematisation of this scientific area.”

The boundary identified at the base of a cliff in the village of Flodigarry on the Isle of Skye was discovered through  analysis of ammonites and microplankton, as well as isotope and magnetostratigraphic research.

Dr. Barski said: “The boundary does not always have to be visible to the naked eye on the basis of the rocks present. The geological time is determined primarily by changes in the fossil groups, their appearance and disappearance.”

The discovery has now been ratified by the International Commission on Stratigraphy (ICS) of the International Union of Geological Sciences (IUGS) - an independent scientific organization associating over 120 countries.

The 'golden spike; ceremony will be held in Scotland this year and there are plans to establish a nature reserve in the area.

A publication on the establishment of the geological boundary will appear in the coming months in the scientific journal Episodes, published by the International Union of Geological Sciences.