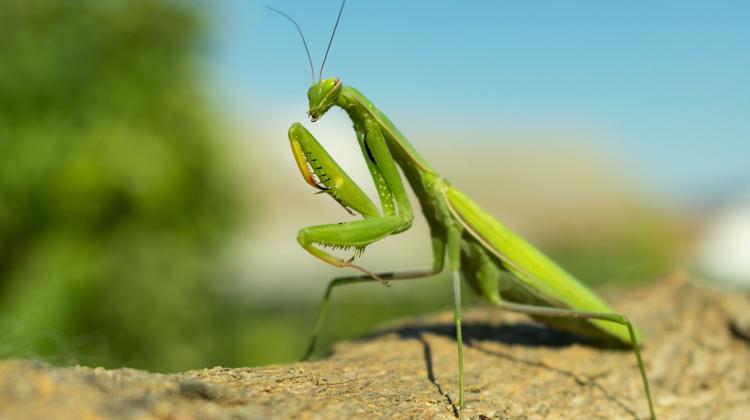 Scientists in Łódź have asked internet users to send them photos of any European Preying Mantis they see, following an unprecedented number appearing in the city.

According to researchers, in the last dozen years, the range of the European mantis in Poland has increased significantly, despite being listed as an endangered species.

Only in the northern part of the country the sight of this insect remains rare.

Professor Agnieszka Soszyńska-Maj, president of the Łódź Branch of the Polish Entomological Society, said: “We ask residents on social media to join the project of creating a map of the occurrence and observations of the European mantis in Łódź and its vicinity, in a word, to capture the sudden appearance of this unusual insect in our city. If someone notices a European mantis in their apartment, on a balcony, in a park, on a meadow, on a plot, in a garden, please take a photo (if possible) and enter the place and date in a post on the Facebook page of the Łódź Branch of the Polish Entomological Society (https://www.facebook.com/LodzPTE/)."

Łódź is an 'urban heat island', and the high temperatures of this summer and investments in 'flower meadows' may have contributed to a rapid increase in the occurrence of mantises.

Scientists emphasize that despite its large size, the insect will not harm humans. Since the mantis is under protection, they also ask not to interfere with its life condition. European mantis may not be caught or kept as a pet, nor its cocoons with eggs removed. If an insect flies into the apartment, it should be carefully taken outside.

For a representative of the Polish fauna, the mantis is a large insect: females can grow up to 9 cm in length. It is a predator and uses its characteristic, raptorial front legs to hunt larger insects, usually locusts and grasshoppers.

Mantises are quite voracious. However, despite the common belief that females eat males, mating of these insects ends up in beheading the male in less than 30 percent cases.

Adults appear from August to October. After mating, the female deposits an ootheca containing 100-200 eggs on a plant. The larvae emerge after wintering. Preying mantises are highly thermophilic insects, they occur naturally in dry and warm mid-forest meadows, grasslands, heaths, edges of pine forests, in wastelands and fallow lands. Their slender shape and light green or yellow-brown colouration allow them blend well with the surroundings and they are difficult to spot in the nature. (PAP)