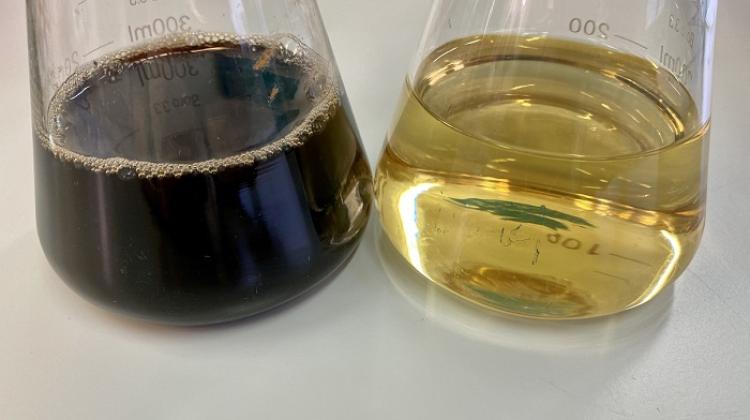 A flask with yellow liquid - an Antarctic bacteria growth medium, next to a flask with dark liquid - bacterial culture with a generous metabolic product, a compound from the melanin group. Credit: Michał Styczyński, UW

A Warsaw researcher has discovered a natural UV filter in bacteria which could replace synthetic cosmetic materials and save coral reefs.

By analysing cold-zone extremophile bacteria from King George Island in Antarctica, Michał Styczyński from the Faculty of Biology of the University of Warsaw discovered that under the influence of specific environmental stress the bacteria produce a substance from a melanin group in metabolic processes.

The compound can be used as an effective, natural UV radiation filter. This is important information for the cosmetic market, because research links chemical ingredients currently used in the mass production of UV filter creams to coral bleaching.

Oxybenzone used in preparations disrupts the hormonal economy of cnidarians, preventing their reproduction, which contributes to their gradual extinction. This problem can be solved by replacing oxybenzone with a harmless substance of natural origin. The chemical compound discovered at the University of Warsaw could meet these criteria.

Styczyński said: “Antarctica is one of the most extreme regions on Earth. It is characterized by very low temperatures, reaching minus 90 degrees Celsius, high exposure to UV radiation, low availability of nutrients, as well as the presence of high salinity water reservoirs.

“Organisms occurring in such extreme conditions had to develop a number of adaptive traits that enable them to survive. Cold-zone bacteria, referred to as psychrophiles or cryophiles, produce specific secondary metabolites, such as protective pigments, thanks to which they can optimally function in a polar environment.”

He added that substances of this type can be obtained on a large scale in laboratory conditions. It involves properly multiplying the correct bacterial strains and stimulating them to produce desirable chemical compounds.

The research carried out at the University of Warsaw also shows that in addition to substances from the melanin group, Antarctic bacteria can produce carotenoids that exhibit strong antioxidant properties. These natural substances are also important for the cosmetic industry.

Styczyński said: “Such substances have the ability to capture free radicals, which is why they are of interest to laboratories that produce anti-aging skin care preparations. Strict market standards and restrictions regulate the content of contaminants from chemical synthesis. Our findings indicate that the cosmetic industry could use the substance of natural origin on a much larger scale.”

The discoveries have a large potential for commercialisation and their introduction to the market will be carried out with the participation of a new spin-off company called Biotemist, established at the University of Warsaw.

It will specialise in the development of technology and the production of substances of natural origin, produced by isolated antarctic bacterial strains: pigment from the melanin group and carotenoids, as well as many other compounds with a broad application potential.

Dr. Robert Dwiliński, head of the University of Warsaw Technology Transfer Centre, said: “The processes of culturing and multiplication of such extreme bacteria are relatively simple due to their lower temperature and nutrition requirements. There are no major technological obstacles to obtain natural substances on an industrial scale this way. Since the market is currently urgently looking for such compounds of natural origin, I believe that with the right management Biotemist has a wonderful future ahead of it and can relatively quickly become a strong market player."