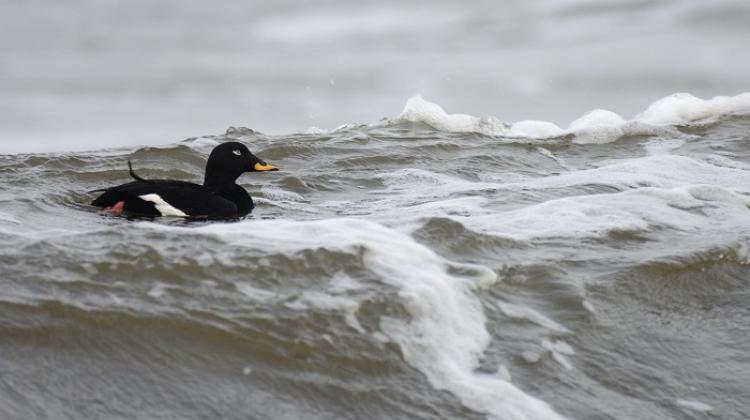 In the 1970s, 47 thousand birds per year died in fishing nets as a result of bycatch, in the 1980s and 1990s it was about 40,000 birds, and in the second decade of the 21st century - approx. 21 thousand birds, according to new data analyses concerning Polish waters. The scale of bird bycatch was previously seriously underestimated.

The scale of bird bycatch in fishing nets in Polish waters was seriously underestimated. New analyses show that in the 1970s every year, 47 thousand birds per year died this way, in the 1980s and 1990s - approx. 40,000, and in the second decade of the current age - about 21 thousand birds. The problem mostly affects three endangered species: Longltailed duck, scaup and velvet scoter.

Bycatch, the unintended capture of animals other than target fish, is one of the most important anthropogenic threats to seabirds, says Dominik Marchowski from the Museum and Institute of Zoology PAS. In the release sent to the PAP- Science in Poland, Marchowski adds next to the north-western part of the Pacific Ocean and waters around Iceland, the southern part of the Baltic Sea is one of the world's three most important regions where the most seabirds die as a result of bycatch in gillnets.

Dominik Marchowski reserves, however, that in the case of Poland, that number was based on three articles from 1972-1990 that concerned a limited area of the Gdańsk Bay and part of the Bay of Pomerania. 'This means that the volume of bycatch in the Polish exclusive economic zone was obviously underestimated', the researcher notes.

To estimate the actual scale of bird bycatch in the Polish sea waters, Dr. Marchowski reviewed available sources on bycatch, in which data were collected using scientific methods. He included data from research from almost 50 years (1970-2018). They came from 48 publications and reports from 1982-2021, which described birds from bycatch in the Polish exclusive economic zone in the Baltic Sea and in sea lagoons in the period from 1972 to 2016.

Based on the literature, Dr. Marchowski determined six separate areas that were important from the point of view of bycatch of seabirds: Lake Dąbie, Szczecin Lagoon, Vistula Lagoon, Bay of Pomerania, Gdańsk Bay and the area near Kołobrzeg. He identified 28 bird species as victims of bycatch, 13 of which had threatened or near-threatened status on according to the 2015 European Red Bird List.

Dr. Marchowski notes that All three species are listed as Vulnerable (VU) in Europe.

He also showed a positive correlation of fishing volumes with the volume of bycatch.

As part his analyses, Dr. Marchowski presented the history of fishing for the Polish fishing fleet in the last 75 years (1945-2020). 'The fishing volume gradually increased to achieve a maximum at the turn of the 1980s. Then there was a significant drop in fishing volumes, associated with political changes in the early 1990s and Poland joining the European Union in 2004. In the period from mid-1990s to 2020, the fishing volume of the Polish fleet in the Baltic Sea was around 125000 tons per year, with slight fluctuations', he writes.

He reserves that the prevention of bycatch in gillnets is difficult.

'Despite effective solutions to minimise longline fishing bycatch in other parts of the world, experiments with gillnets have only brought a small effect so far. In some cases, treatments aimed at reducing bycatch by using contrast panels on gillnets resulted in an increased mortality of birds. Temporary exclusion of areas important for birds from fishing remains the most effective method of protecting seabirds from bycatch in gillnets. The next step aimed at the current and up-to-date assessment of the scale of bycatch in the Polish sea waters will more advanced analyses consisting in modelling the bycatch volume, bird densities and fishing effort. This approach will allow for a more precise than in this work assessment of the scale of the phenomenon and its time and spatial distribution. The results of these analyses can be used to assess the population survival rates using population matrix models, and on this basis it will be possible to determine the acceptable bycatch thresholds for individual species', the zoologist point out.