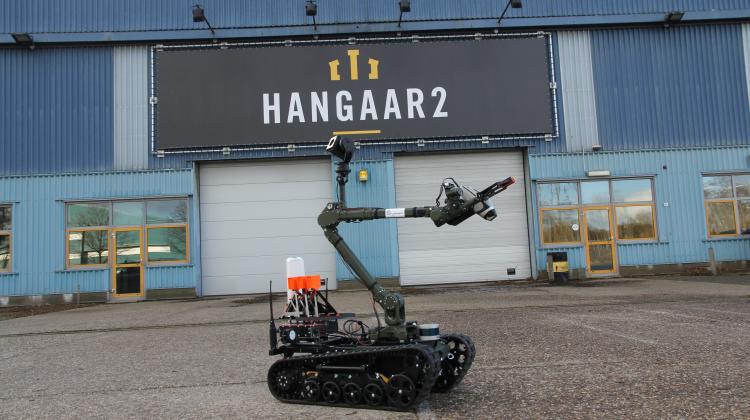 Engineers from Łukasiewicz Research Institute – PIAP are among the five finalists in the competition organized by ESA and ESRIC. Its participants will test the robotic system for raw material reconnaissance on the Moon.

In July 2021, engineers from the Łukasiewicz Research Institute – Industrial Research Institute for Automation and Measurements PIAP entered the Space Resources Challenge with their robot. The competition is organized by the European Space Agency (ESA) and the European Space Resources Innovation Centre (ESRIC). Its aim is to test the robotic system for raw material reconnaissance on the Moon to enable future exploitation of extra-terrestrial resources.

Polish engineers passed the selection stage and joined a group of 13 institutions from Europe and Canada to participate in the next stage of the competition, which took place in November 2021 in the Netherlands. The task was to get through an obstacle course on a test track imitating the Moon environment and collect data on interesting geological structures. The team members were Jakub Główka, Filip Jędrzejczyk, Michał Bryła from Łukasiewicz - PIAP and Łukasz Kruszewski from the Institute of Geological Sciences of the Polish Academy of Sciences.

'We did not know what terrain our robot would have to navigate and what could be a challenge for it. Therefore, when we reached the key part of the track and saw the tracks we left on the tested surface in the cameras, we felt like real explorers. Now we would definitely like to improve our result', says Jakub Główka from Łukasiewicz - PIAP, head of the department where the preparations for the competition were carried out, quoted in the press release.

The five winners of this stage of the competition will receive funding for improving their solution and preparing for a similar test in September 2022. The competition winner will be given the opportunity to further advance the technology and become part of the ESA supply chain for future moon exploration.

The competition winner will deliver components that, along with the entire system, will land in the area of the South Pole of the Moon in 2029 (as part of the European Large Logistic Lander mission). This is one of the few currently planned lunar missions alongside the famous Artemis mission to build a transit and research station on the South Pole of the Moon, we read in the press release.

The robot sent to the competition is a 100 kg mobile platform designed for visual reconnaissance. For this purpose, a special version of the robot was developed based on the PIAP Patrol platform. The robot is equipped with specialized cameras and a track-wheeled drive system ensuring increased mobility in difficult terrain conditions.