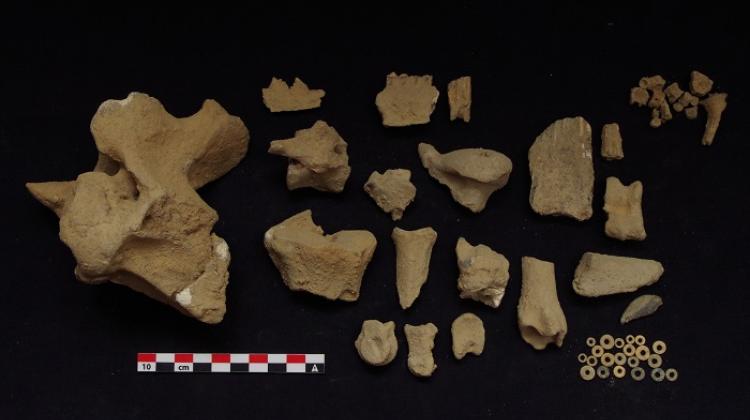 Scientists have found that humans domesticated cattle around 10,000 years ago in the Central Nile region in today's Sudan.

The preliminary conclusions from researchers at the Polish Academy of Sciences who recently returned from excavations, overturns traditional thoughts that domesticated cattle came to East Africa from the lands of Turkey and Iraq.

Researchers are now waiting for precise sample dating results that will confirm their age. All indications are, however, that it is a period far preceding the 5th millennium BCE, a commonly accepted date of introduction of domesticated cattle from the Middle East. This would mean that domestication took place locally.

The area of the latest research was the Letti Basin in the Central Nile Valley. So far, this area has been known mainly as the economic base of the capital of the medieval kingdom of Makuria - Old Dongola, where Polish excavation missions have been working for five decades.

Researchers call this area the great African intersection, because this is where the trails of animal and people, existing for millennia along the Nile, cross the Sahel belt - the southern border of Sahara.

In this area, on the edge of the desert and arable areas, the researchers discovered archaeological sites, several millennia older than the ancient civilizations and the Christian kingdom of Makuria. Their research sheds light on the topic of domesticating cattle by the first shepherds about 10,000 years ago.

The puzzle is where the domesticated cattle of early Eastern Sahara shepherds came from, says archaeozoolologist, Dr. Marta Osypińska.

Geneticists suggest that all domestic cattle we know today originated from a herd of aurochs that lived about 10,000 years ago in the lands of today's Turkey and Iraq. Therefore, it would have to reach Africa in a domesticated form, according to the prevailing views in the 5th-6th millennium BCE.

However, archaeologists thought earlier that African cattle was domesticated also locally, in the Eastern Sahara region. The deserting ecosystem was to be conducive to 'strengthening relations' between humans and aurochs, and humans had followed the herds of these large ruminants from the earliest times. However, there was no direct evidence that such a process actually took place, i.e. the remains of wild cattle and its transitional and domesticated forms. In the case of African domestication, the very presence of the remains of archaic cattle (in sites older than those indicated by geneticists at 5th-6th millennium BC) would constitute such evidence.

Dr. Osypińska said: “Due to the lack of finds (from earlier excavations) in the form of well -preserved bones of large ruminants, the idea of local domestication of cattle was abandoned, and genetic reports dominated the scientific debate. Meanwhile, during our research in Letti, we made discoveries that shed new light and allow to resume the debate about the origin of cattle in Africa.”

At one of the sites from the beginning of the Holocene Age (approx. 10,000 years ago), the researchers discovered the remains of domesticated cattle with 'aurochs-like' features. They were among the bones of other, strictly wild species of animals inhabiting the savannah.

The researchers are waiting for precise sample dating results, which will confirm their age and allow to talk about the local domestication.

Osypiński said: “That group of people already knew ceramic vessels, used quern-stones to grind cereal grains (wild varieties of millet), so they can be called early-Neolithic communities. They still hunted wild savannah animals, with one only exception - cattle at an early stage of domestication.”

From a layer from the same period, archaeologists extracted a tiny clay figurine depicting a cow. Although the head has not survived, according to the discoverers the silhouette undoubtedly points to a large ruminant. Very similar figurines are known for many shepherd cultures, including the Nuer people from South Sudan, the researchers say.

The interdisciplinary team's research was financed by the Polish National Science Centre.