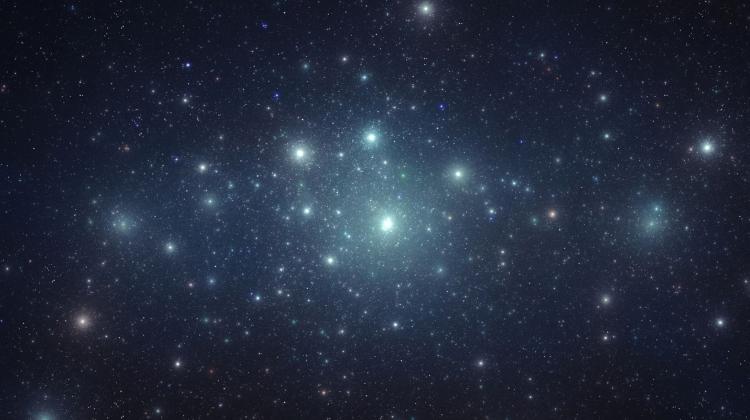 A model that enables the analysis of the processes responsible for the emission of X-rays within neutron stars has been developed by scientists from the universities of Lodz and Warsaw.

Neutron stars are the final stage of the evolution of stars with large masses (up to 10 solar masses). To understand them and the phenomena taking place in their immediate vicinity, Dr. Michał Szanecki and Professor Andrzej Maciołek-Niedźwiecki, and Professor Andrzej Zdziarski from the Nicolaus Copernicus Astronomical Center of the Polish Academy of Sciences in Warsaw developed the new model that uses a mathematical description of physical phenomena.

Dr. Michał Szanecki said: “Very interesting processes occur around neutron stars, including the release of a huge amount of energy, which goes into the energy range corresponding to X-rays, the same as used, for example, in diagnostics. By analysing the spectrum of the radiation, it is possible to determine what is happening in these objects. And this is what our original model is for.”

With the enormous complexity of phenomena and processes that have to be taken into account in the calculations, the only effective methodology is the use of numerical calculations and simulations.

A range of commonly available models is currently used to analyse the spectra observed from accretion disks around black holes. One of the most accurate models is the one created by the Polish team, which takes into account the effects of general relativity.

Dr. Szanecki said: “For the correct analysis of X-rays released within neutron stars, a model different from that used in the case of black holes is necessary. Since neutron stars, unlike black ones, have rigid shells, radiation can bounce not only off the accretion disk, but also off the star itself. Our model allows for the analysis of the X-ray spectrum emitted from the immediate vicinity of these stars. Our previous models have already gained interest in the international scientific community and have proven to be useful research tools.”

The scientists are now focusing on the reflection of radiation from the surface of a neutron star. This allows them to accurately determine the important parameters of the system, such as the speed of the star rotation, its radius, ionisation, as well as the structure's atomic composition.

Szanecki said: “Thanks to this, we can investigate whether what we believe to be responsible for generating this radiation, actually is, or our direction of thinking needs modification. This will lead to a better understanding of the whole and, as a result, bring us closer to determining the final equation of the state of neutron matter, and ultimately to further discovery of what is still unexplored in space.”

The scientists assume that within two years of the project they will be able to finalise it and share a description and operation of the proprietary model for the X-ray spectrum analysis.

Full text of the release is available on the University of Lodz website.