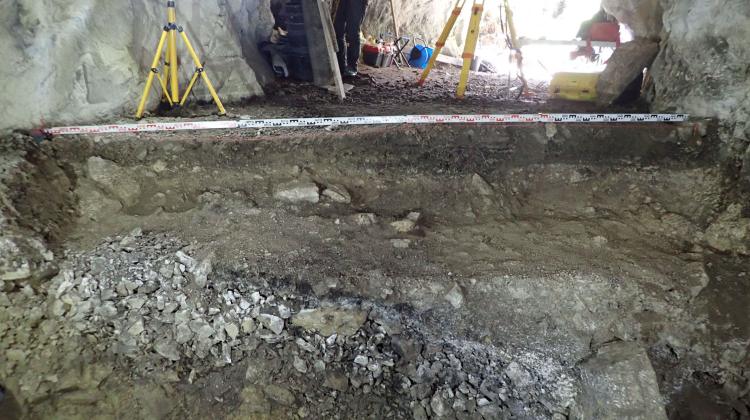 Traces of Alpine ibex hunters from several thousand years ago have been discovered in the Belianske Tatras in Slovakia.

Based on isotope analyses, the joint Slovak-Polish research expedition in Hučivá Cave (Hučivá diera), say the traces were found in what was a Palaeolithic settlement left by the Magdalenian people, best known from France and Spain in the 13th millennium BC.

Professor Paweł Valde-Nowak from the Institute of Archeology of the Jagiellonian University in Kraków said: “It was a group of hunters specialising in hunting ibex, a species no longer found in the Tatras today.

“We found several hundred blades of thrown weapons, bone needles, a fragment of a stone lamp and many bones of hunted animals.

“They were resting in the remains of a large fire.”

During previous research seasons in Hučivá Cave, above the artefacts from the end of the Ice Age, the Slovak-Polish team also found fragments of 15th and 16th century clay pots as well as coins from World War II.

Professor Valde-Nowak previously told PAP that scientists had been looking for traces of the prehistoric man's presence in the Tatra caves since the 19th century; unsuccessfully until now. Magura Cave in the Polish Tatras was one of the selected sites, but excavations carried out in that cave before World War II did not bring the expected results.

Palaeozoologists, geologists, sedimentologists, archaeobotanists and palaeogeneticists as well as members of the Science Club of Students of Archeology of the Jagiellonian University participated in the field work in Hučivá Cave.

Later this season, the research will move to the Polish side of the Tatra Mountains, the researchers announced.

The initial article was published in Antiquity - Project Gallery.