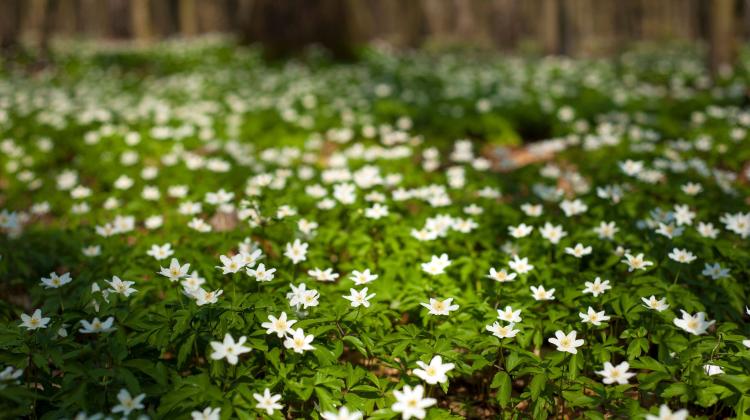 Photos posted on social media by nature lovers provide scientists with valuable information about the impact of climate change on flowering, Polish researchers and colleagues from other countries have found.

The researchers checked whether photos made by nature lovers, collected in the iNaturalist social network database, have a significant impact on the collection and use of scientific data.

Project leader, Dr. Radosław Puchałka from the Nicolaus Copernicus University in Toruń said: “The wood anemone is a common species that most people can correctly identify, and its photos allow us to verify the species designation.

“It is also often photographed as one of the faster flowering forest plants, as a result of which there are numerous photos of it from various parts of Europe available online.

“The wood anemone has similar ecological requirements as several other species associated with deciduous forests, so it can serve as a model.”

Species observations posted on social media by volunteers and nature lovers, along with the location, date of observation and photographic documentation, make it possible to collect a large amount of data on the times of phenological phases and their variability in time and in space.

In turn, the availability of more accurate daily meteorological measurements and climate maps gives allows to search for dependencies between dates of flowering and meteorological conditions. As a result, it is possible to create climate forecasts for much larger areas of the Earth.

Study co-author, Dr. Marcin K. Dyderski from the Institute of Dendrology of the Polish Academy of Sciences, said: “Such research will enable a better understanding of the impact of climate change on inter-species integration.”

Based on the photos in the iNaturalist database, scientists have determined that the median start of flowering of the wood anemone in Europe is currently the 24th-41st day of the year.

Scientists predict that in future climatic conditions, in 2040-2060 and 2060-2080, flowering will start 19-34 days earlier. The biggest shifts of the beginning and end of flowering are expected in Eastern Europe, and the smallest in the British Isles and Scandinavia.

According to the results of the study, the average annual temperature and annual rainfall were the strongest factors affecting the beginning and end of flowering of the wood anemone. The end of flowering was also strongly determined by the minimum temperatures in March and May. The expected flowering changes will accelerate it by about one month.

He added that the next step is to study not only other species of the understorey, but also the reaction of animals.

He said: “We need to determine the impact of climate change not only on the very occurrence of a given species, but also on how its functioning in changed conditions.”

Research aimed at explaining the seasonal variability, the order and synchronism of flowering phases and their dependence on environmental factors, has been conducted for over 200 years.

Due to its time-consuming nature and availability of researchers, it is usually limited to several vegetation seasons and a small number of locations. Phenological cameras and satellite photos make it possible to increase the spatial and temporal range of observation, but they also have their limitations. Cameras are expensive, and the resolution of satellite photos does not allow to identify the phases of plant flowering.

In their daily work, scientists also use herbal sheets, but the cost of their maintenance is very high and there are few of them, which makes them difficult to access.

The research team included scientists from Italy, Czechia, Lithuania, Slovenia and Ukraine. The results of the study were published in Agricultural and Forest Meteorology.