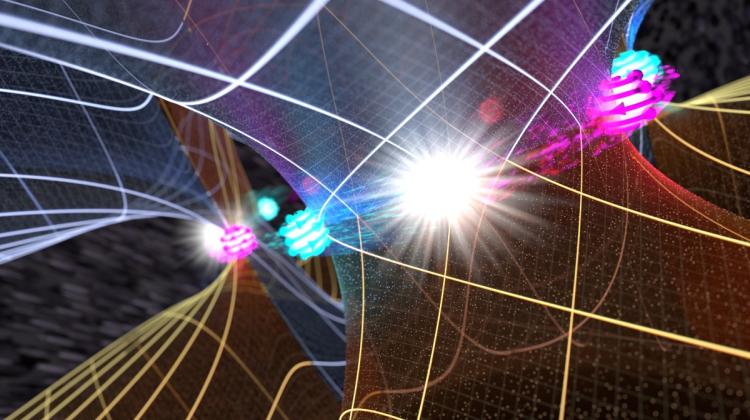 Trajectory of exceptional points on the real part of the spectrum. Credit: Mateusz Król

For the first time in the world, Polish scientists have observed the annihilation of exceptional points from various degeneration points. Their discovery may contribute to the creation of advanced optical devices whose properties can be voltage-controlled.

The observations were made in optical cavities prepared at the Military University of Technology. In the optical cavity, the conditions of light propagation are modulated by controlling the liquid crystal material inside. In such an optical resonator, it is possible to control the so-called exceptional points.

The world is made of elementary particles. Most of them have their own antiparticles (just like in the case of an electron - its antiparticle is a positron). When a particle and an antiparticle meet, both disappear (annihilate). This happens when matter meets antimatter. There are also quasiparticles and quasiantiparticles, which have their source in excitations of, for example, charge, vibrations of particles, e.g. in crystals.

Study co-author Dr. Jacek Szczytko from the Faculty of Physics of the University of Warsaw said: “Quasiparticles may be even abstract mathematical concepts, if they can be realised in physical systems. The concept of quasiparticles simplifies the description of quantum phenomena.”

He added that without generalising the concept of quasiparticles it would be difficult to understand the functioning of transistors, LEDs, superconductors and some quantum computers.

Professor Guillaume Malpuech from the French Institute Pascal, CNRS in Aubere said: “These are special parameters of the system leading to sharing two different solutions, which can only exist in damped systems, i.e. those in which oscillations slowly disappear in time. Exceptional points can be used to create ultra-sensitive sensors, single-mode lasers or unidirectional transport.”

The scientists studied phenomena in an optical resonator filled with a liquid crystal. Liquid crystal is a state of matter whose properties are between those of conventional liquids and those of solid crystals.

Dr. Wiktor Piecek from the Faculty of New Technologies and Chemistry of the Military University of Technology said that in thin, micrometer layers of liquid crystals, it is possible to distinguish directions with special optical properties, called optical axes. This property determines the speed of propagation of light with a given direction and polarization. The combination of this feature and the fact that liquid crystals exhibit a varied electrical permeability in space, enables electrical control of the conditions of light propagation through the layer of liquid crystal - this is one of a basis of operation of liquid crystal displays - LCDs.

In the structures made at the Military University of Technology a unique, liquid crystal generating an extremely large difference in the speed of light along different optical axes (birefringence) was used.

Dr. Piecek said: “The whole forms an optical cavity - a resonator, through which light passes with such wavelength that the distance between the mirrors is exactly half of the wavelength multiplied.”

This condition is met for the so-called resonance modes of the cavity, i.e. light with a certain wavelength (energy), polarization and direction of propagation. The presence of a liquid crystal, whose orientation can be changed by applying voltage, allows to tune the conditions for the occurrence of cavity modes. In addition, the resonance condition changes when the light falls on the cavity at an angle, which can lead in particular to a situation in which different modes can have the same energy despite different polarization of light.

In a specific liquid crystal orientation considered in the article, two different modes should cross only for four specific angles of light falling on the cavity. This assumption would allow scientists to get an ideal structure without any light loss. The light trapped in the cavity can exit through non-ideal mirrors or be scattered. The average time of photon presence inside the microcavity can be determined based on spectroscopic measurements.

Also, due to the distinction of directions by the liquid crystal layer, a difference was observed in the scattering of the polarized light along and perpendicular to the optical axis of the liquid crystal layer. As a result, in the place of each degeneration point a pair of exceptional points was observed, for which both the energy and life of a photon in the cavity is the same.

Lead scientist Mateusz Król from the Faculty of Physics of the University of Warsaw said: “In the studied system, it was observed that the location of exceptional points can be controlled by changing the voltage applied to the cavity. With the voltage decrease, exceptional points resulting from various degeneration points are approaching each other, and for sufficiently low voltage they overlap. As the approaching points are characterized by the opposite topological charges, they annihilate at the time of their meeting.”

Ismael Septembre, a doctoral student at CNRS, added that such behaviour of topological quasiparticles, i.e. the annihilation of exceptional points from various degeneration points, is the first time it has been observed.

Earlier works showed the annihilation of exceptional points, but they were quasiparticles that appeared and disappeared exactly at the same degeneration points.

In recent years, exceptional points have been particularly intensively studied in various fields of physics.

Dr. Barbara Piętka from the Faculty of Physics of the University of Warsaw said: “This discovery may make it possible to develop optical devices, whose topological properties can be voltage-controlled.”