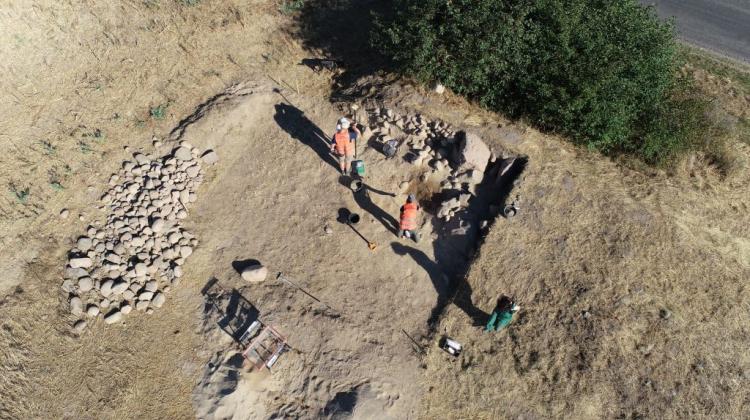 A human skull and animal remains have been found in the place where one of the greatest hoards from the late Bronze Age in Wielkopolska was discovered several decades ago.

In 1943, during the levelling of embankment in today's Kaliszany (near Wągrowiec) a large hoard from around 800-750 BCE was discovered. It consisted of 44 copper alloy objects. Among them were axes, necklaces, bracelets, and a pin.

In August this year, archaeologists returned to carry out excavations and learn about the circumstances of depositing the valuables in the ground. It was confirmed that the embankment was man-made.

Research project leader Dr. Marcin Maciejewski from the Institute of Archaeology of the Maria Curie-Skłodowska University in Lublin told PAP:

“Our research has shown that the structure was erected to deposit metal objects, but not only that. In the place of the hoard discovery, we found a human skull, animal remains arranged in anatomical order, and vessels.”

The researchers plan to perform detailed laboratory analyses of the vessels. It may be possible to determine what was stored in them. They will also analyse the other artefacts.

Archaeologists believe that the burial mound was made after the hoard, bones and vessels had been deposited. Previously they suspected that the objects could have been buried in an existing embankment that was created several hundred years earlier and performed a different function.

During this year's research, they established that the embankment-mound was built of thousands of stones and boulders. The archaeologists also found tools that could have been used to process stones. Under these stones, they discovered the vessels, animal remains (including a cow skull) and a human skull.

Until now, local residents believed that this place was a cholera cemetery, a grave from the time of the Deluge, Napoleonic times or World War II.

Dr. Maciejewski said: “I am very happy to be able to tell local residents that people lived here 3,000 years ago. This builds local patriotism and interest in archaeology.”

There were attempts to level the embankment not only during World War II, but also later, during the functioning of the local state farm.

The scientist believes that the place of depositing the hoard was not accidental, because over 2,000 years ago there was an elevation over wetlands in this place - on one side there was a watercourse and its valley, and on the other a lake. The elevation was located on the boundary of the area inhabited by the people in the area.

According to Maciejewski, this means that the main motivation of people who buried the bronze objects was not the desire to hide them from threats, but instead it was a symbolic act.

At the end of the Bronze Age and at the beginning of the Iron Age, the inhabitants of the current areas of north-western Poland deposited metal tools, ornaments and weapons on the outskirts of their territories, and the hoard from Kaliszany is not an isolated case.

Deposits were made on the boundaries of inhabited areas to mark and sanctify them. The acts of depositing metal objects on the boundary were addressed to supernatural forces - deities and ancestors who were placed in physical lands outside our world.”

Excavations are part of the project financed by the Polish National Science Centre, associated with the study of treasured from the end of the Bronze Age and the beginning of the Iron Age.