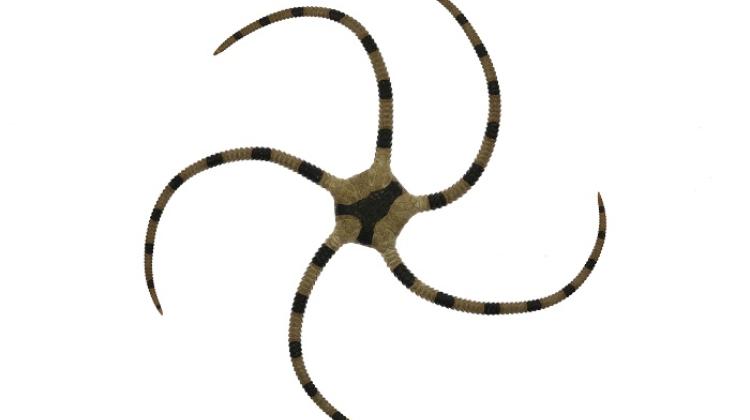 Brittle stars, animals with five-segment radial (pentaradial) symmetry, lived millions of years ago in the territory of present-day Poland. They survived, although today they can only be found in high salinity waters. Fossil species of these agile echinoderms found in Kujawy and the Krakow-Częstochowa Upland have been described by scientists from Warsaw.

A new genus and species of fossil brittle stars - Ophiobartia radwanksii - have been identified by Dr. Michał Loba from the Polish Academy of Sciences Museum of the Earth in Warsaw and Dr. Urszula Radwańska, a professor at the University of Warsaw. The article presenting discoveries from the two of the Upper Jurassic (Oxfordian and Kimmeridgian) locations: from the sites Wapienno/Bielawy in Kujawy and the Zalas quarry in the Krakow-Częstochowa Upland, appeared in Acta Geologica Polonica.

Brittle stars (Ophiuroidea) are the less known cousins of starfish. Together with them, as well as sea cucumbers, crinoids and sea urchins belong to echinoderms (Echinodermata). Echinoderms are very specific animals that live only in seas, the scientists explain in the Museum of the Earth press release.

Like most echinoderms, they are characterized by five-segment radial body symmetry. They most often have five narrow, snake-like arms built of calcite plates connected to each other by muscles and ligaments.

This structure of the arms distinguishes them from starfish, which have wide arms that contain internal organs. Arms of starfish can move, especially up and down, but are not used to move; instead, starfish move with ambulacral legs on the underside of the body.

Arms of brittle stars are different. Their internal structure is segmented, each arm segment consists of a central part, which scientists call the vertebrae. They note, however, that although the name comes from an analogy to vertebrae of vertebrates, apart from a slightly similar appearance and a similar function (a part of axial skeleton), the two structures have nothing in common. The 'vertebrae' of the brittle stars are surrounded by a set of plates - one dorsal plate, one abdominal plate and pair of lateral plates. Lateral plates also very often have mobile spikes.

“Brittle stars use snake-like movements of their arms to move and catch their prey. For echinoderms, they are quite agile,” say Dr. Loba and Dr. Radwańska. “The occurrence of ambulacral legs in modern species is most often limited to the central disk and the initial section of the arms. These animals can be considered predators. But do not imagine a spectacular pursuit of the prey - brittle stars hunt for a small or slowly moving prey.”

The scientists add that small crustaceans, molluscs or sea worms can fall prey to brittle stars. Most brittle stars, however, are quite opportunistic and mainly feed on carrion. In this context, coils can be included in the group of sea decomposers. When a body of a fish or whale falls to the bottom of the ocean, brittle stars begin the feast together with other species of scavengers.

“There are also species that have adapted to feeding on detritus. They eat bottom slit and sand to decompose the microorganisms and organic matter they contain. The sediment itself is then excreted via exactly the same path that it first got inside, i.e. through the mouth. Unlike most starfish, brittle stars do not have an anus,” the researchers say.

They add that a large group of brittle stars (Euryalida) adapted to feeding on plankton in the water. The arms of these animals often branch many times into smaller parts that are used to catch plankton from water.

THERE ARE NO MORE SEAS WITH HIGH SALINITY IN POLAND. FOSSILS REMAIN

Dr. Loba and Dr. Radwańska remind that echinoderms are a very ancient group of animals and brittle stars appeared among them in the Palaeozoic. Brittle stars with 'modern' anatomy, the one they currently have, appeared in the beginning of the Mesozoic, in Trias (not earlier than approx. 250 million years ago).

Skeletons of fossil brittle stars are sometimes preserved entirely as fossils. These, however, are relatively rare situations. In most cases, the skeleton breaks down after the death of the animal and the decay of soft tissues. Individual skeletal fragments end up in the sediment. In the fossil record you can find basically all types of calcite tiles that build brittle star skeleton during the animal's lifetime. Lateral tiles have the greatest diagnostic value for palaeontologists. It has been shown that fossil species can be identified based on them.

Scientific publications dealing with isolated tiles of brittle stars have been appearing for a long time in Western Europe, while the area of Poland was very poorly studied in this respect until recently.