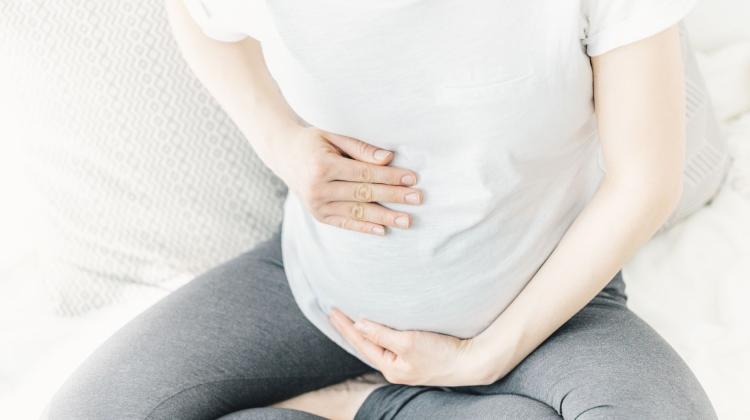 Mother's who have a too high pre-pregnancy BMI and excessive weight gain during pregnancy affect the weight of the child, both at birth and later in life.

In the journal 'Children (https://doi.org/10.3390/children9101431), scientists from the Pomeranian Medical University in Szczecin assessed the impact of pre-pregnancy maternal BMI (pBMI) and gestational weight gain (GWG) on the weight of children from birth to two years of age. The scientists also wanted to find out whether the woman's overweight and underweight affected the duration of breastfeeding.

The population of overweight and obese women of reproductive age is constantly rising. Earlier studies have shown that pre-pregnancy maternal overweight and obesity and gestational weight gain (GWG) increase complication rates during gestation and delivery including gestational hypertension, preeclampsia, gestational diabetes mellitus, increased rates of caesarean delivery, prematurity, still birth, congenital anomalies, macrosomia and shoulder dystocia (a dangerous situation in which , after delivery of the head, the baby's anterior shoulder gets caught above the mother's pubic bone).

Other studies suggest that excessive maternal weight programs a child’s weight and impacts its later tendency to gain weight, causing future obesity, diabetes, neurodevelopment and augmented cardiovascular risk. Some authors even believe that it affects the entire future human life.

The report authors said: “Poland is one of the countries where the proportion of obese and overweight children is growing very rapidly.

“Since, according to programming theory, the health status of children and adults is influenced by various events during the foetal and perinatal period, this paper presents the influence of selected factors such as maternal nutritional status, smoking, mode of delivery, antibiotic therapy during pregnancy, feeding children on their body weight from birth to two years of age.”

The researchers found that the pre-pregnancy maternal BMI gestational weight gain correlate with birth weight and weight in neonatal period, and may affect the child's weight and health in later life. However, they do not affect the breastfeeding duration.

The authors emphasize that in the light of their results and all available medical knowledge, preconception obesity prevention and life style modification of children of obese women is required. In their case, special attention should be paid to a proper diet and physical activity, together with behavioural and social support strategies.

For the study, the researchers selected 100 mother-child dyads of healthy, full-term newborns from singleton pregnancies born at the Department of Obstetrics, Gynecology and Neonatology of the Pomeranian Medical University in Szczecin.

Depending on pBMI, the participants were categorized into underweight (BMI < 18.5), overweight (BMI 25–29.9), obese (BMI ≥ 30) and normal weight (BMI 18.5–24.9) women. With regard to weight gain during pregnancy, women with inadequate, normal, and excessive weight gain were distinguished

Newborns underwent a physical examination on the first day of life. The mode of delivery and birth weight was recorded. Then at 1, 6, 12 and 24 months old, the authors interviewed the parents, asking about the type of baby's feeding (naturally vs. artificially) and child's weight.

After taking into account the factors that could skew the results, the scientists found that the mother's pBMI had a significant impact on the body weight of children at birth, but not only. This effect was noticeable throughout the neonatal period, meaning that pBMI strongly affected the child's weight in the first month of life.

The scientists also found that maternal gestational weight gain had an equally strong impact on the body weight of children at birth.

However, they did not observe any influence of pBMI and GWG on breastfeeding duration. The percentage of 6-month breastfeeding women was similar among underweight, overweight and obese mothers before pregnancy.

The researchers said: “Our research is the first prospective study evaluating the relationship between the body weight of healthy children from birth to 2 years of age, pBMI and maternal gestational weight gain in the Polish population.

“This early period of life, consisting of the first 24 months of life, is very interesting from the preventive medicine point of view, as even little changes, such the modification of diet and lifestyle make it possible to prevent the negative consequences of obesity and metabolic disorders.”

As for whether mother's BMI before pregnancy and gestational weight gain also affect the child's later life, not only early childhood, the scientists cite the results of a 2012 meta-analysis, which show that high birth weight may result in becoming overweight in later life.

In another study conducted on a large group of mothers and children in China it was found that the obesity in children at 1 year of age was more common in the offspring of obese mothers than in those with normal body weight. Yet another meta-analysis reported 36% of children (3.5 to 4.5 years) of obese mothers to be obese, while only 7.8% of children of mothers with normal weight were found to be obese. Moreover, a meta-analysis including over 160,000 pairs of mothers and children, found an association between pBMI ≥ 30.0 and the incidence of overweight in children from 2 to 18 years of age.

The authors add that there are also publications contradicting this thesis. They wrote: “The mean birth weight values in our study were <4000 g, the limit above which there is an increased risk of overweight or obesity in adult life."

Studies evaluating the impact of GWG on later life have also revealed that offspring born to mothers with excessive GWG or higher pBMI have a greater risk of overweight and obesity from childhood to adulthood. A cohort study of 10,226 participants has reported an increased risk of 48% of overweight children at 7 years of age of mothers who gained more on weight than recommended in the weight gain recommendations, when compared with the children of mothers who met the weight gain criteria.

The researchers said: “Contrary to the results observed by Li et al., our study did not demonstrate that pre-pregnancy obesity influences obesity in children at 12 months of age. However, it should be noted that in the study conducted by Li et al., the risk of obesity was only increased in children aged 12 months of mothers who had both pre-pregnancy overweight/obesity and excessive GWG. Due to the small study sample size, this type of analysis could not be performed in our research."

They added that most probably the environmental conditions including lifestyle and diet, and not genetic conditions or those related to pregnancy and childbirth exert the greatest impact on the prevalence of obesity among two-year-old children. They also suggest that, according to the “developmental overnutrition hypothesis”, maternal factors (i.e., high glucose, free fatty acids and amino acid concentrations) can cause permanent changes in appetite control, neuroendocrine function and/or energy metabolism in the developing fetus, leading to an increased risk of obesity that manifests only after the first year of life.

The authors concluded: “The decreasing prevalence of overweight and obese women of reproductive age especially in perigestational period could reduce the prevalence of obesity in early childhood. In order to increase the percentage of women of a healthy weight, outreach is needed to promote a healthy lifestyle among adolescent and young women. Physical activity and healthy, balanced nutrition should be encouraged. Preconception counselling should be made by both obstetricians and primary care doctors to promote and implement the following BMI guidelines.”

In their opinion, this is also necessary to reduce the potentially significant healthcare related costs of increased odds of adverse foetal and maternal pregnancy outcomes, increased hospital stay and increased inpatient costs.

According to the authors: “Preconception obesity prevention and life style modification of children of obese women is required (modification of diet and physical activity, together with behavioural and social support strategies).

“Further research on a larger population should be continued to investigate the extent to which maternal weight and gestational weight gain affect infant weight.”

Poland is one of the countries where the proportion of obese and overweight children is growing very rapidly.

At the same time, according to official data from Polish Central Statistical Office, between 2009 and 2019, the percentage of overweight among women aged 20–39 increased from 25.8 to 31.3.

This means that more than 30% of women of childbearing age are overweight. According to experts, this is a significant social and health problem.