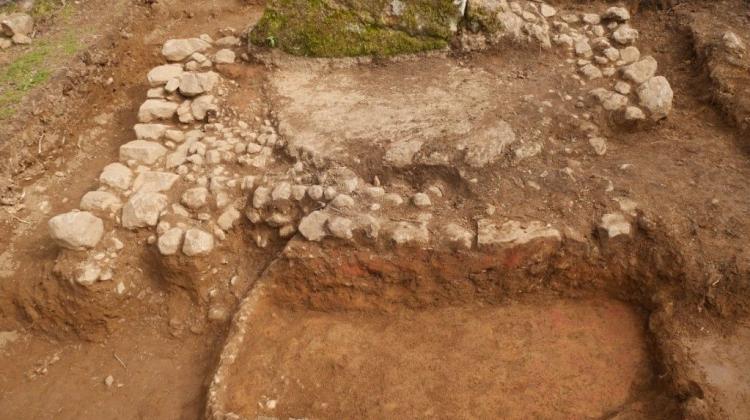 The well-preserved remains of an ancient winepress have been found near the Roman fort Apsaros (today's Gonio near Batumi, Georgia).

According to the Polish-Georgian team of archaeologists, the installation almost certainly formed part of a farm producing wine for the Roman troops.

The winepress was located a few hundred meters from the garrison.

Polish team leader, Dr. Radosław Karasiewicz-Szczypiorski from the Polish Centre of Mediterranean Archaeology of the University of Warsaw said: “From the point of view of the military regulations, this area should be clear. But people have always been interested in doing businesses. Therefore, brothels were built near this and other Roman camps, and, in this case, a winepress.”

The Georgian side is represented by Shota Mamuladze from the Agency for the Protection of Cultural Heritage of Adjara.

Karasiewicz-Szczypiorski added that businesses near camps were often owned by veterans - retired soldiers who, thanks to good contacts with the camp command, started lucrative activity. Both legionaries and auxiliary troops (soldiers who did not have Roman citizenship), were probably stationed in Apsaros.

After examining the installation the archaeologists were able to also guess the kind of wine that was produced there.

Karasiewicz-Szczypiorski said: “It had to be Kvevri wine we also know from today's Georgia. The wine fermented in clay vessels buried below ground. It had a very different taste from the wine aged in barrels or steel tanks. The wine was earthy and sweet.”

The Polish-Georgian expedition is carrying out research within the walls of the fort and outside the fortress. The winepress was discovered outside the walls with laser scanning (LiDAR), which revealed terrain anomalies.

The installation was used in the 2nd and 3rd century CE, when the Roman garrison was stationed in Apsaros. Archaeologists believe that the installation almost certainly formed part of a farm producing wine for local needs, including for the Roman troops.

Karasiewicz-Szczypiorski said: “It is worth noting that the winepress has structural features typical of the local winemaking tradition but hydraulic mortar characteristic of Roman constructions was used to seal the working surface and the must tank. The winepress is thus a testimony to the exchange of ideas on the border between the Roman Empire and the local Kingdom of Iberia.”

The successes of this year's expedition, which took place in spring, also include the discovery of a large number of items used to write and illuminate the workplace. Thanks to these finds, the researchers received confirmation of earlier assumptions that the building discovered in previous years served as the headquarters (principia) - the most important building in a Roman garrison.

Polish-Georgian excavations in the Roman fort Apsaros have been conducted since 2014. This is today's Gonio, located near the holiday resort Batumi in West Georgia. As part of the research project, a number of significant discoveries have already been made, including a mosaic floor in the garrison commander's house. This is a unique discovery in Georgia. Today, Gonio is one of the major tourist attractions near Batumi.

Apsaros (as the fortress was known among the ancients), was built approx. 2,000 years ago on the border of the Roman province of Cappadocia. Due to its strategic location, the fort had an important role in the defence system of the eastern borders of the Roman Empire. Today, picturesque ruins remain. Only fortifications are well preserved. Their interior is mostly an empty space with some outlines of the foundations of old buildings. Near the fortress there was once the only convenient road from Colchis (Western Georgia) to the Roman provinces in Asia Minor.