Poles among creators of best satellite images of water 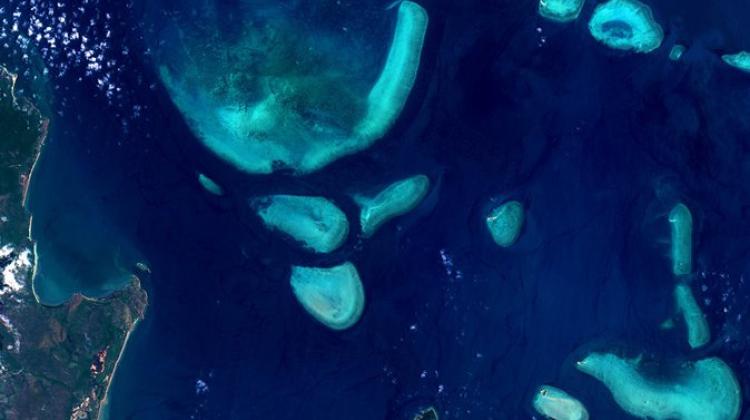 The best satellite images showing the problem of pollution of the Earth's water ecosystems were awarded in the 'Seize the beauty of our planet' contest organized under the auspices of the Polish Space Agency.

The image presenting the impact of global warming on the bleaching Great Barrier Reef by Michał Mirończuk won third place.

The jury of the international contest awarded 13 satellite images depicting water ecosystems impacted by climate change or human action.  Mirończuk’s entry shows the bleaching of the Great Barrier Reef off the coast of Australia.

The other winners of the 3d edition of the international contest include five Poles, as well as submissions from Bulgaria, India, Canada, Portugal, Turkey and Italy. The best images were chosen in a public online vote and by a jury composed of representatives of the space sector.

The motto of this year's edition of the contest was 'Together for blue Earth!'. According to the Polish company CloudFerro, the contest organizer, the images were to focus on the issue of Earth's water and its protection.

Joanna Małaśnicka from CloudFerro said: “This year, we wanted to draw attention to the alarming condition of aquatic ecosystems and the urgent need to prevent their further degradation. Many participants sent images of endangered water areas that were important for the development of their regions.”

CloudFerro is a supplier and operator of platforms providing access to the data of the European Earth observation programme Copernicus, along with a cloud environment for their processing. The contestants used selected platforms to generate an image of a water area significantly impacted by climate change or human action.

He said: “I submitted an image of Greenland to the contest because I am interested in observing areas near the poles via satellite images that clearly show the effects of climate change. I was particularly impressed with this particular area because of the beauty of its landforms.”

Second place winner Boyan-Nikola Zafirov from Bulgaria, a geospatial data consultant, chose to image the endangered Lake Atanasovsko. In his opinion, this reserve is the best example of the diversity and uniqueness of Bulgarian nature.

Other authors focused on the problems of marine environment pollution, drying up water bodies, flooding and global warming. The competition entries depicted areas in Australia, China, the United States and Greenland, where the negative consequences of climate change and human activity are clearly visible. The value of satellite images has been confirmed by scientists dealing with the subject of water, the organizer emphasises.

Professor Mariusz Czop from the AGH University of Science and Technology in Kraków, one of the experts of the contest, said: “The range of hydrological system parameters that can be studied keeps expanding, and remote sensing methods allow us to collect data from a radiation spectrum far greater than the human eye can see. This is a significant extension of the aquatic environmental research methods that contributes to a better understanding of the course of hydrological processes.”

According to the contest organiser, the European platforms CREODIAS and WEkEO as well as the German CODE-DE and EO-Lab receive about 30 terabytes of satellite images per day as part of the European Earth observation program Copernicus. Thanks to such projects, anyone can access satellite images and the tools necessary to process them. Users do not need to download satellite data to their computers, they do not need to have their own extensive IT infrastructure - they can process large amounts of data in the cloud, directly on the platform.

The winning images can be viewed on the contest website.