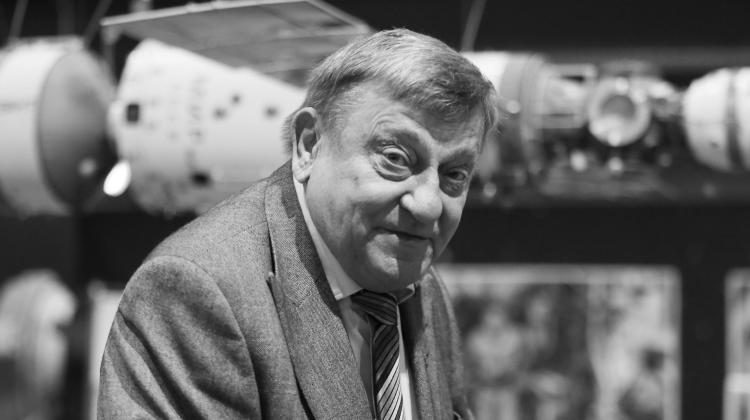 Mirosław Hermaszewski, the first and only Polish astronaut, has died at 81. Hermaszewski, born in 1941 in Volhynia, flew into space aboard the Soviet Soyuz ship in June 1978.

General Hermaszewski's death was reported to PAP by his son-in-law, Ryszard Czarnecki who said he had died died on Monday afternoon in one of Warsaw's hospitals. PAP found out unofficially that the general had suffered from kidney disease, he was operated on Monday, but there were complications that led to his death.

The flight that brought fame to Hermaszewski began on June 27, 1978 at 17:27 CET. The Soviet ship Soyuz 30 took off from the Baikonur Cosmodrome with the crew: Mirosław Hermaszewski and the commander, Soviet colonel Pyotr Klimuk. “The Earth broadcasts music. Rodowicz sings +Colorful fairs+. Anna German sings +Hope+, the favourite of geologists, but above all astronauts. (...) Against the background of the melody, we hear the final countdown commands,” Hermaszewski later said recalling the launch in his autobiographical book Ciężar nieważkości. Opowieść pilota-kosmonauty ('The Weight of Weightlessness. Story of a Pilot-Cosmonaut').

“During the fourth lap we will fly over Poland. Thinking about it, I feel a strange excitement, even though I am still very far away. (...) Central Europe is shrouded in clouds, but part of our coast cuts off from the grey waters of the Baltic Sea. Night falls over Poland. Glued to the porthole, I absorb the view of the Gulf of Gdańsk, I recognize the lights of Bydgoszcz. The Vistula is phosphorescent along its entire length with the remnants of daylight. The south of Poland is covered with a tight veil of clouds. We fly slightly below Warsaw and plunge into another, fourth cosmic night,” Hermaszewski wrote, describing his impressions of space flight.

After two days, the crew of the Soyuz 30 spacecraft met with the orbital station Salyut 6 with cosmonauts Vladimir Kovalenok and Alexander Ivanchenkov already onboard.

The Polish astronaut participated in scientific experiments covering various aspects of the behaviour of the human body in weightless conditions. He conducted observations of the northern lights and work in the field of remote sensing. In one of the experiments called 'Czajka', he was supposed to determine the efficiency of blood vessels in the legs and the circulatory system's ability to compensate. During the experiment, due to the created pressure difference, blood would flow from the upper parts of the body to the legs.

He later recalled: “The experiment was monitored in the Control Centre by scientists from the Military Institute of Aviation Medicine. Each of them felt obliged to check their hypotheses or at least ask a question. At their request, I increase the negative pressure and pass out several times. I feel sick while they are delighted and happy like children.”

During the flight, the cosmonauts orbited the Earth 126 times and set several Polish records approved by the World Air Sports Federation. “In one lap, I saw sunset in the north, night, and sunrise and day in the south. In 90 minutes I saw a whole day, I also saw summer and winter in the south, all the seasons. How is that possible? I lived a whole year in 90 minutes,” Hermaszewski described.

The landing took place on July 5 in the steppes of Kazakhstan. Hermaszewski later said: “We were still only 1,500 kilometres from home - and that's when the first, timid flames appeared (...). I felt the weight of my own body. An invisible force began to press my chest and I felt as if my larynx was about to collapse. Breathing was getting harder and harder and it took effort, and it was almost impossible to speak. The flames were already very clear, they roared right next to my face behind the fireproof glass of the porthole. I still flinched several times, because this nice colour is, after all, plasma heated to fifteen million degrees Celsius.”

On board Soyuz 30, Hermaszewski took with him the flag and the state emblem of the People's Republic of Poland, photographs of Edward Gierek and Leonid Brezhnev, soil from the fields of Lenino and Warsaw, miniature editions of the 'Communist Manifesto'. Hermaszewski also flew into space with a facsimile of the first book On the Revolutions of the Heavenly Spheres and a drawing of the solar system by Nicolaus Copernicus. As personal equipment, he took a miniature edition of Pan Tadeusz, which he gave to Pope John Paul II years later.

Hermaszewski had been interested in aviation from a young age. His older brother, Władysław, a jet pilot, had a significant influence on his interests. “I heard about him on the radio and imagined the noise of his plane on parades, newspapers wrote about the +leading pilot officer Władysław Hermaszewski+. There was also a reading in the Polish language textbook for fourth graders: +How little Władzio became an aviator+,” Hermaszewski recalled.

Born in 1941 in Lipniki in Volhynia, as a two-year-old child, Hermaszewski almost miraculously survived an attack by a unit of the Ukrainian Insurgent Army on the night of March 25/26, 1943. That night, 182 inhabitants of Lipniki were killed, including Hermaszewski's grandfather Sylwester. The next morning, the future astronaut was found by his father, who searched for survivors and the remnants of their belongings.

In his book, he wrote: “Near the hedges in a frozen field, my father unexpectedly noticed a characteristic chequered blanket, with his son Mirosław motionless in it, and a lot of blood around in the snow. Dad was sure I was dead, I was pale, but when he shook me, I opened my eyes and said: +dad, si+ - which meant fire, and +buch+ - that is, what was a lot and does not need to be explained.”

After the war, in 1945, Mirosław Hermaszewski and his family moved to Wołów near Wrocław. He graduated from elementary and high school there. “Many young people at the very beginning think that they won't be able to achieve much. They say: I come from a poor family, what can I do? They don't set any life goals and waste their lives. And it's that when someone has achieved something in life - for example, became a astronaut - he had it planned from the beginning and that's how it went,” the astronaut explained in one of the interviews with PAP.

In 1960, Hermaszewski started flying gliders at the Wrocław Aeroclub, and later planes at the airport in Grudziądz. In 1961 he joined the Military Aviation Academy in Dęblin. After graduating with honours, he was assigned to the air defence regiment in Poznań. He graduated with honours from the Academy of the General Staff in Warsaw. He served in the country's air defence forces as a squadron commander in Słupsk, deputy regiment commander in Gdynia and commander of the 11th fighter regiment in Wrocław.

In 1976, he joined a group of candidates for cosmonauts as part of the USSR's international programme Interkosmos and began training in the Star City near Moscow. “From the first day of our stay in the Star City, we were also being prepared psychologically to operate in the conditions of weightlessness, stress and time deficit. It was also a nice escape from class activities, because we, pilots, lacked space. For the time being, we had to be content with physical exercises and torture on aerotrims, German wheels, gyroscopes, trampolines and other truly circus devices, disliked by pilots,” he wrote in his book.

In the years 1981-1983 Hermaszewski was a member of the Military Council of National Salvation (WRON). As he explained years later, he learned about his membership in WRON from television. When it first met, he was in Moscow, where he was studying at the Military Academy of the General Staff.

In the years 1987-1990 he was the commander of the Fighter Pilots School in Dęblin, where in 1988 he was promoted to the rank of brigadier general. He then served as second-in-command and head of flight security of the Polish Air Force and Air Defence.

In 2018, Mateusz Morawiecki's government prepared a law that would collectively demote all people who in 1943-90 betrayed the Polish raison d'état, including all former members of the WRON. The law was passed by the parliament, but vetoed by President Andrzej Duda, who cited the example of General Hermaszewski as a person who should not be stripped of his military rank under the new law.

Hermaszewski performed his final flight in a MiG-29, in October 2005, when the then Minister of National Defence Jerzy Szmajdziński found out that the only Polish astronaut had not yet performed a farewell flight.

Until recently, Hermaszewski was invited to meetings all over Poland to talk about his space flight and promote astronautics. In April 2011, he was among the astronauts awarded the medal 'for merits in the conquest of space' by the Russian president Dmitry Medvedev on the occasion of the 50th anniversary of Yuri Gagarin's flight. (PAP)