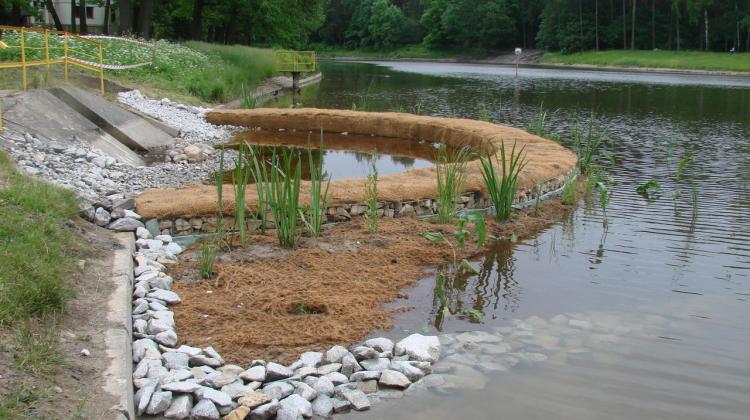 Ecohydrologists from the University of Lodz received the prestigious EU award "The Best LIFE projects" for the project of water reservoir reclamation in Arturówek, Łódź. It is among the best projects completed in 2016-2017, and competes for the "Best of the best award".

The awards ceremony will take place during the "2018 EU Green Week", on May 23, 2018 in Brussels - says project manager Dr. Tomasz Jurczak from the Department of Applied Ecology at the Faculty of Biology and Environmental Protection, University of Lodz.

Innovative solutions developed by scientists from Lodz allowed to significantly improve water quality and reduce of the problem of cyanobacterial blooms in the upper Bzura river basin, including the Arturówka reservoirs.

"The project also demonstrated an innovative approach to rainwater management in urban areas, allowing the applied systems to both effectively improve its quality and limit the negative flood wave effects" - adds Dr. Jurczak.

As part of the project, ecohydrologists from the University of Lodz constructed special installations in the reservoirs that effectively removed pollutants that entered the reservoirs from the river and rainwater collectors.

The systems used for this purpose consist of three parts: sedimentation stage, where the water supply is slowed down and sedimentation processes occur at the bottom of the slurry; geo-chemical stage, where water is purified mainly from dissolved phosphorus compounds, and the biological stage, in which water plants assimilate nitrogen compounds. They have been named sedimentation-biofiltration sequential systems (SBSS) because of the function they perform.

"The solution implemented in the EH-REK project in the form of integration of ecological SBSS biotechnologies with classic hydrotechnical solutions such as underground separators allowed to create so-called hybrid systems" - explains the scientist.

According to Dr. Jurczak, the efficiency of such systems reaches up to 95 percent suspension removal and 80-90 percent reduction of nitrogen and phosphorus compounds.

In addition, a number of ecohydrological solutions have been combined for the first time in the upper part of the Bzura river basin system, allowing to eliminate toxic blooms from reservoirs in Arturówek. In addition to the construction of the installation, trainings in water management in urban areas for local governments were organised as part of the project.

The project "Ecohydrologic rehabilitation of Arturowek recreational reservoirs (in Lodz) as a model approach to rehabilitation of urban reservoirs" was carried out in 2010-2016. The coordinator of the project was Prof. Maciej Zalewski from the Department of Applied Ecology at the Faculty of Biology and Environmental Protection, University of Lodz, and Dr. Tomasz Jurczak was the project leader. The co-beneficiaries were the city of Łódź and the Łódź Infrastructure Company. The project was financed by the European Commission and the National Fund for Environmental Protection and Water Management.

The experience gained in Łódź during the EH-REK project is currently being used to develop system solutions to problems related to climate change for the city of Radom as part of the project LIFERADOMKLIMA-PL, the beneficiary of which is the University of Lodz.