"Letters to a Friend" won the Queen Silvia Nursing Award 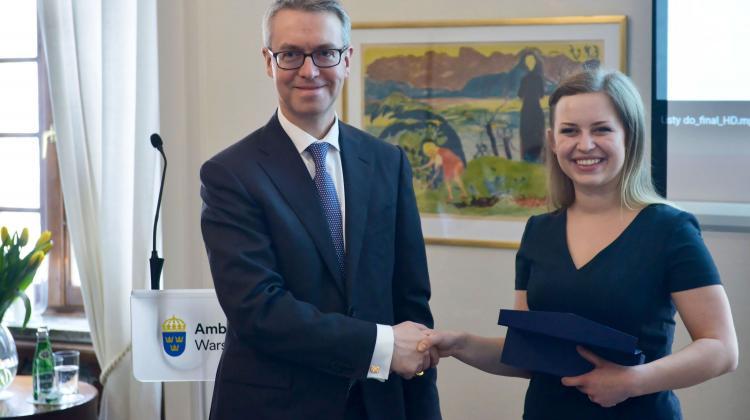 Ambassador of the Kingdom of Sweden Stefan Gullgren (L) and Paulina Pergol (P) awarded during the ceremony of presenting the Queen Silvia Nursing Award at the Swedish Embassy in Warsaw. Photo: PAP/ Jakub Kamiński 19.03.2019

Exchange of traditional correspondence between elderly residents of nursing homes and volunteers can improve the mental state of the elderly. For this idea called "Letters to a Friend", first year nursing student Paulina Pergoł was awarded the prestigious Queen Silvia Nursing Award (QSNA).

The Queen Silvia Nursing Award was presented in Poland for the third time. The jury of the competition decided to award Paulina Pergoł, a graduate student of nursing at the Medical University of Warsaw. According to the jury, her idea "Letters to a Friend" can contribute to improving the mental condition of elderly residents of nursing homes.

Receiving the award at the Swedish Embassy in Warsaw, Paulina Pergoł said that the idea for "Letters to a Friend" was born from her own experience.

"While volunteering in Colombia, I met a boy who was extremely touched by a traditional letter he received from his family. His emotions reminded me about older patients who I looked after every day. For them, too, small gestures of interest and contact with other people are very important. This inspired me to create a project addressed to elderly residents of nursing homes, usually lonely people, without family and friends" - she emphasised.

The author of the idea "Letters to a Friend" hopes that exchange of correspondence with volunteers will give seniors an opportunity to share their problems, insights or memories, which will make them feel important and appreciated by the younger generation.

The national geriatric nursing consultant and a member of the competition jury Dr. Ewa Kądalska admitted during the Queen Silvia Nursing Award ceremony that the feeling of loneliness is one of the most serious problems of the elderly.

As many as 3 out of 10 seniors in Poland - as reminded during the ceremony - experience loneliness and isolation. The same percentage of the elderly declare the lack of close interpersonal relationships.

"In the elderly group there are people who do not have anyone to spend time with. Paulina Pergoł`s project is therefore a concrete answer to the social needs of seniors and we see great potential in it. Long-term attention paid to seniors, interest in their affairs and encouraging them to engage in social activity may contribute to improving their quality of life and prevent their social exclusion" - explained Dr. Ewa Kądalska.

During the ceremony, it was reminded that the Polish healthcare system suffered from the nursing shortage. According to the ranking of the Organization for Economic Cooperation and Development (OECD), there are 5.2 nurses per 1,000 inhabitants in Poland, while in Switzerland, Denmark and Germany there are several times more - 13 to 18 nurses per one thousand people. Meanwhile, nurses contribute to the improvement of the quality of medical care, medical errors and nosocomial infections are less frequent as a result of their work.

"We want to strengthen the position of the nursing profession as a satisfying activity and attractive direction of professional development of students" - said Marcin Radziwiłł, president of the Medicover Foundation, the third time organizer of the Polish edition of the Queen Silvia Nursing Award.

The Queen Silvia Nursing Award was established by Swedish Care International. It is awarded to nursing students and people who are in the process of nursing specialization, who care about the development of skills and gaining experience in the field of geriatric nursing.

The main prize includes a PLN 25,000 scholarship and internships with Polish and international competition partners who are leaders in the health care sector. The finalists of the competition also have the opportunity to receive the award personally from Her Majesty the Queen Silvia of Sweden.

The Supreme Council of Nurses and Midwives took the honorary patronage of the third edition of the competition. The competition partners include: the Swedish Embassy in Warsaw, the Polish Society of Gerontology, the National Institute of Geriatrics, Rheumatology and Rehabilitation, the Wolski Hospital, Tena, Essity, Medicover and Medicover Senior. (PAP)