Silver jewellery dating back a thousand years found in Czermno 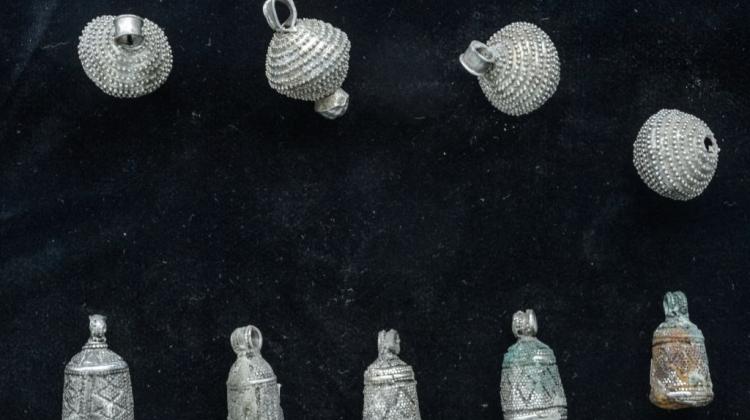 Jewellery, dated to the IX-XIII century presented at a closed show in the library of Maria Curie-Skłodowska University in Lublin. Photo: PAP/Wojciech Pacewicz 25.11.2015

A rich collection of silver jewellery from the IX-XIII century period, found during excavations in Czermno in the Lublin province, was presented in Lublin. According to the researchers, the finds testify to the beginning of the statehood of Poland and Russia.

Today\'s Czermno, according to archaeologists, could be the main centre of the Cherven Cities, over which the Polish Piasts fought the rulers of the Russian Kiev.

"We have tangible evidence of the times when the history of Poland and Russia began. Lart time these items saw the light of day before being hidden in the ground, could be in the times of Boleslaw the Brave or Vladimir the Great. During the expansion of the Piast state, and on the other hand the Kievan Rus, the area began to be important. Castles were erected, the elites appeared, because these decorations were not worn by ordinary people" - said Prof. Marcin Wołoszyn from the University of Rzeszów, head of research in Czermno.

Wołoszyn emphasised that some of the discovered ornaments can be traced to the culture of East Slavs, and others to West Slavs. "For the first time, we see that the elites at the end of the tenth century had contacts so with the world of West Slavs, christianised by Rome, and the world of the East Slavs, christianised by Constantinople. Intriguing question arises: whether we are dealing with relations with Russia, or relations with Poland? There is no simple answer" - added Wołoszyn.

Prof. Andrzej Kokowski from Maria Curie-Skłodowska University in Lublin emphasised very high artistic value of the discovered items. "This jewellery had to be made by the masters who trained in the finest workshops of their time. This usually points to Byzantium, at the time the centre (in addition to Spain), which created the canons of beauty" - he said.

"Those who made the jewellery had to be world-class masters. Most likely, the items were brought here, but I would not be surprised if they were made locally, because the area already had the potential" - added Kokowski.

The items were discovered in this and last year. In a tomb, located on the site of embankment, archaeologists discovered several silver head ornaments, including earrings from the twelfth and thirteenth century, which probably were placed in a leather bag. Archaeologists believe that this tomb is associated with the end of the existence of the fortified settlement. Only a part of it has been excavated, the work will continue. Archaeologists found a skeleton of a man, but the decorations were for a woman.

Two other treasures date back to the beginnings of the castle in Czermno. Dozens of ornaments, including a large lunula (crescent-shaped pendant) and large, hollow beads date back to the second half of the tenth century. Among them, archaeologists found destroyed elements or semi-finished jewellery. They were hidden in the ground.

96 ornaments were found in the woods, where someone buried them in a clay pot. There were silver lunulae, large beads, earrings, and smaller beads of carnelian and glass. These products come from the ninth and tenth centuries, they were hidden around the year 970.

All the treasures found within a kilometre of Czermno, during excavations related to the implementation of the international project " Cherven Cities - golden apple of Polish archaeology". The project involves scientists from Poland, Germany, Ukraine, Belarus, Slovenia, Slovakia and the Czech Republic.

The discovered items will be subjected to laboratory tests and conservation work. From May next year they will be on display in a museum in Tomaszów Lubelski.