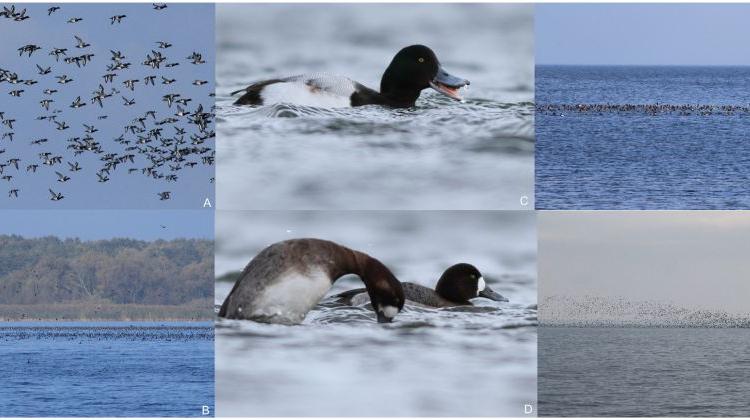 Scaup and its flocks in the Oder Estuary. Photo: D. Marchowski, D. Kilon. Source: PLOS ONE

For scaup - a duck, whose numbers have been dropping very quickly for years - invasive species of mussel living at the mouth of the Oder is a major source of food. It works literally like a magnet, attracting armies of ducks. The results of research on the subject are presented in PLOS ONE.

Experts are watching with growing concern the European population of scaup (Aythya marila) - aquatic bird of the family Anatidae: in the last 20 years, the number of these birds has dropped by more than half - by approx. 60 percent!

One of the major areas of scaup concentration in Europe (outside breeding period) are the waters in the southwestern part of the Baltic Sea, at the mouth of the Oder, between Szczecin and Świnoujście. At the lagoons in this area there are usually approx. 20 thousand scaups, and the greatest concentrations exceed one hundred thousand, which represents 38-70 percent of the entire population wintering in north-western Europe. The greatest number of individuals of this species - 105 thousand 700 birds - was recorded in April 2011 - remind the authors of the publication in PLOS ONE, researchers from the Faculty of Biology, University of Szczecin, West Pomeranian Natural History Society, the Ornithological Station of the Polish Academy of Sciences in Gdańsk and the Research Station (Sea Fisheries Institute) in Świnoujście.

They found that the scaup living in the Odra River estuary feed almost exclusively on foreign species of mussel, zebra mussels. The mussel so wanted by the ducks comes from the zone of the Caspian Sea and the Black Sea. It was brought to the estuary already in the nineteenth century. Today it’s local population is considered to be extremely large.

In the 12 years of observation (2002-2014) in the Polish part of the estuary: the Szczecin Lagoon and Kamień Lagoon, on the river Dziwna and Lake Dąbie, the study authors conducted 22 bird counts. They collected 678 samples of zebra mussel. As a result, they developed a model of the spatial distribution of scaup in the study area.

"It turned out that the birds congregate are in the places of greatest concentration of zebra mussel, while areas with a low density of mussels are avoided - explained one of the authors of the publication, Dominik Marchowski from the University of Szczecin. - Zebra mussel definitely dominated in the scaup food. Based on the examination of the content of digestive systems of birds tangled in fishing nets and drowned - we found that this species of mussel accounts for 97 percent biomass".

The study\'s authors estimated that the scaup alone (being part of the benthos eating birds) eat on average 5,400 tons of zebra mussel per year, which is 5.6 percent of all the mussel resources in the Oder estuary.

"Our results present a clear picture of the relationship between migratory water bird species whose numbers decline, and alien to our fauna species of mussel. This is an extremely important discovery because it may provide basis for actions aimed at protection of the species" - emphasised Dominik Marchowski.

Due to the areas where such a high percentage of the total scaup population concentrates, Poland has a particular responsibility for the preservation of this species: finding ways to effectively protect it and halt the decline in numbers - noted the ornithologist.

He added that the instruments proposed by the European Union could help. "Establishment of Natura 2000 areas in the Odra River estuary was a step in the right direction. The next step, which must be taken by the Polish government should be legal regulations, contained in an integral document assigned to each Natura 2000 area - protection plan or plan of protection tasks" - he explained.

This, however, is quite a challenge, because scaup is endangered by human activity - comment the study\'s authors. The biggest problems include bycatch in fishing nets and the consequences of increasingly popular water sports such as kitesurfing and windsurfing. According to the authors of the study, the protection of scaup benefits from the concept of sustainable development promoted in the EU (which means an economic model that assumes conscious shaping of the relationship between human activities and care for the environment) and studying the mechanisms of functioning of the ecosystem of the estuary.