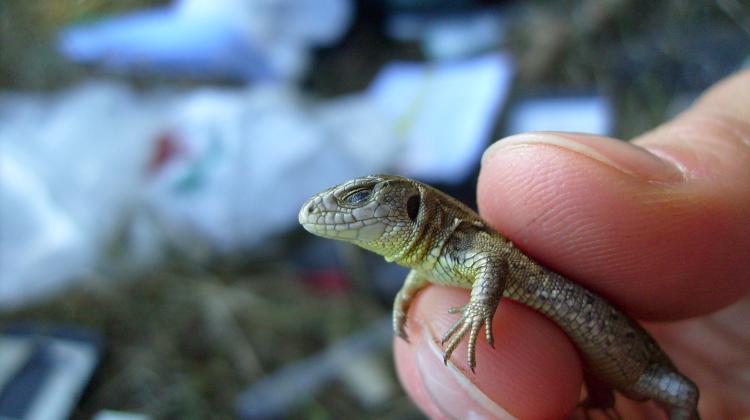 Scientists have detected salmonella bacteria in sand lizard, one of the most common lizards in Poland. But we should not worry, because it us a strain very rarely detected in humans - note the authors the study, researchers from the two universities in Poznań.

Salmonella bacteria in the wild sand lizards living in Poznań have been detected by scientists from two universities in the city: University of Life Sciences and Adam Mickiewicz University. They presented the results of the study in the "Herpetological Journal" (http://www.ingentaconnect.com/content/bhs/thj/2016/00000026/00000001/art00008).

They were the first in the world to conduct research on the sand lizard population, which is one of the most common lizards in Poland, often found near humans.

The study was conducted in two places: around Lake Rusałka in Poznań and on the edge of a forest in Morasko. It turned out that as many as one-quarter (24 percent) lizards were carriers of Salmonella enterica, representing subspecies houtenae - told PAP one of the authors, Krzysztof Dudek from the Institute of Zoology of the University of Life Sciences in Poznań.

That\'s a lot, but much less than the rate observed earlier in exotic species of reptiles, among which often more than 40 percent were carriers of the bacteria - noted the authors of the study.

"Fortunately, we know from literature that this strain is very rarely detected in humans, so the sand lizard does not pose a threat to human and we should not be afraid. The safest course of action is simply not to try to catch lizards - especially considering that these animals are subject to legal protection" - said Krzysztof Dudek.

The study authors noted that salmonella in lizards is probably part of the microflora of food. "Research indicates, however, that even the lizards that have Salmonella in the gastrointestinal tract, do not show signs of disease. It is a bit like bacteria Escherichia coli in humans, which in the large intestine are nonpathogenic, but can cause problems in other parts of the body" - explained Krzysztof Dudek.

"Recently, reptiles are in this respect a very intensively studied group, but most studies focus on house pet species, in the context of terrarists’ exposure to salmonellosis. Studies conducted in the US have shown that a high percentage of children treated for Salmonella had turtles at home!" - he reminded.

According to the CSO data, in 2014 per 100 thousand residents of our country there were nearly 22 cases of salmonellosis infection, a year earlier there were less than 20 cases per 100 thousand residents. Children are the most affected group. The most common cause of infection is Salmonella enteritidis - rods from poultry products, especially eggs.