Gowin: 3D printing and furniture production among the industries with the greatest development potential 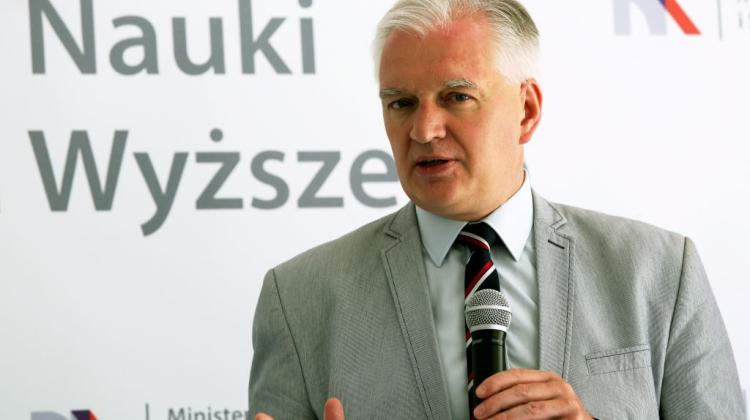 3D printing industry and the furniture industry will be among the priority areas of the economy, on which spending on research and innovation should focus - said on Saturday in Olsztyn Deputy Prime Minister, Minister of Science and Higher Education Jarosław Gowin.

At a conference in the Warmia-Mazury Special Economic Zone in Olsztyn, Deputy Prime Minister reminded that making the Polish economy more innovative is one of the key conditions for implementation of the Plan for Responsible Development, so called Morawiecki Plan.

Gowin said that as the Ministry of Development is working on the map of economic potential, the Ministry of Education and Science is also creating the map of scientific potential. In his opinion, after overlapping the two maps it will be possible to identify common areas, for which the government should create particularly favourable conditions for development.

"The largest investments, the largest public aid will go to these economic areas, in which according to both maps Polish scientists have a lot to say" - he assured.

The Minister also reminded that the institution "connecting the world of science and the economy" is the National Centre for Research and Development, which this year alone has 8 million zlotys for companies operating in high-tech sector and universities and scientists conducting research in this area.

As an example of "the success of young Polish entrepreneurs and inventors" representing the industry based on digital technologies, Deputy Prime Minister mentioned the manufacturer of 3D printers - the company Zortrax, which he visited in Olsztyn. According to experts, this is the first Polish brand, which launched a global expansion in the 3D printing industry.

According to the minister, the owner of Zortrax told him that there were several other companies that developed with similar dynamics, but he was "the last who stayed in Poland" because the others "were already in Silicon Valley or other countries". According to Gowin, it happened because young entrepreneurs, scientists and inventors encountered roadblocks "thrown by their own state".

"On the one hand, they encountered many bureaucratic barriers, their own state treated them on the principle of suspicion. On the other hand, Polish entrepreneurs had to compete with foreign investors, who enjoyed a whole range of privileges. Now we want to introduce equal, equitable, fair competition principles" - he said.

According to Gowin, the current government was appointed to open the opportunities that had been blocked so far. He noted that it is not about creating privileges for Polish entrepreneurs, but ensuring that they can compete with foreign capital on an equitable basis.

Among the activities that can be a chance for Polish companies and innovators, Deputy Prime Minister mentioned the programme Start in Poland, developed by the Ministry of Development together with the Board for Innovation, through which nearly 3 billion zlotys will be invested in the development of start-ups in Poland.

"We are confident that with this type of activities not only the entire Polish economy will grow much more dynamically, but also the regions such as Warmia and Mazury will have new opportunities" - he said. He added that to take advantage of these opportunities there is also a need for institutions such as special economic zones.

Gowin revealed that among the areas that the government will treat as a priority, will also be the furniture industry, which is the leading economic sector of Warmia and Mazury. He noted that today Poland is one of the European leaders in this area, but - as he emphasised - the point is that the Polish furniture products should become more innovative.

President of the Warmia-Mazury Special Economic Zone Grzegorz Smolinski, who attended the conference on Saturday, said that in the last days the company Delphia Yachts was awarded a permit to operate in the sub-zone Olecko. At the 2.5-hectare site the company plans to build a research centre that will facilitate innovative production of yachts based on nanotechnology.