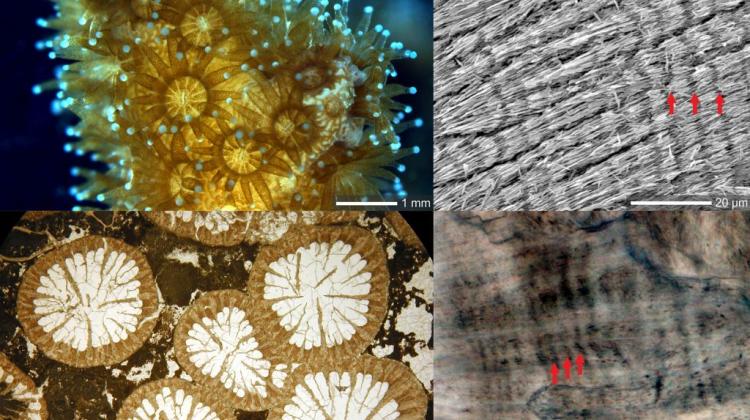 Friendship of algae and corals is much older than thought - the symbiosis of these organisms dates back at least 212 million years, to the Triassic - showed a team led by Polish scholars. Researching this issue was not obvious - the remains of algae, in contrast to coral skeletons, are not preserved in fossil record.

Some species of corals and unicellular algae discovered long ago that it is worthwhile to stick together. Both parties benefit. Algae - incorporated into the cells of corals - not only are safe, but the coral also provides nitrogen and phosphorus compounds, as well as carbon dioxide needed for photosynthesis. Corals, in turn, can use the sugars and oxygen produced by algae. In addition, the presence of algae significantly increases the rate of formation of calcium carbonate skeleton of the symbiotic corals, presumably by reducing the acidity of the solution, from which calcium carbonate skeleton is formed.

It has only now turned out, however, that corals and algae are old friends - their symbiosis dates back at least to the late Triassic - showed scientists in a clever study published in the prestigious "Science Advances". In the study, leading role had researchers from the Institute of Paleobiology PAS (Dr. Katarzyna Frankowiak and Prof. Jarosław Stolarski) as well as researchers from several institutions in Poland, US, Brazil and Switzerland.

"The evolutionary history of stony corals is very long - dating back to the Paleozoic, more than 400 million years" - said in an interview with PAP the correspondence author of the study, Prof. Jarosław Stolarski from the Institute of Paleobiology in Warsaw. He explained, however, that very few fossils of corals were preserved from those earliest times. "The evolutionary boom of these animals occurred in the Middle Triassic - approx. 240 million years ago. Then many reef-building corals appeared, and their success continues to this day. Until, it was difficult to understand the reason for their success. Our research shows part of this success could be attributed to algae" - explained the researcher.

Prof. Stolarski says that the research team - as part of research conducted by Dr. Katarzyna Frankowiak from the Institute of Paleobiology PAS - analysed the fossilized remains of coral found in Turkey, dating back 212 million years, from the bottom of the then ocean - Tethys.

It was not easy, however, to determine whether corals from this period lived in symbiosis with algae. While corals had a strong mineral skeleton and could be preserved to our time in the form of fossils, single-celled algae that live inside coral tissue cells (so-called endosymbiosis) does not leave any direct traces in the fossil record. But the researchers came up with the idea how to find out - using deductive reasoning - if cooperation on the line coral-algae has a long history.

First, it was necessary, however, to study contemporary corals - it was not exactly clear how the cooperation with algae translates to the structure of the skeleton.

ALGAE GIVE RHYTHM AND TONE

Research conducted by the Poles has demonstrated that in symbiotic corals, matter processing is related to the circadian cycle - photosynthesis in the alga occurs only during the day. Meanwhile, the corals that do not live in symbiosis with algae, are more independent of the times of day and night. All this is reflected in the structure of the skeleton. "We managed to find microscale periodicity in corals from the Triassic, and this means that they lived in symbiosis" - said Prof. Stolarski.

He added that this hypothesis could be confirmed using the second, isotopic method. The international team demonstrated that the skeletons of symbiotic and nonsymbiotic corals differ from each other in this respect. The results of the samples from the Triassic indicate that the corals must have cooperated with algae.

According to the researcher, not all conditions are conducive to coral-algae symbiosis. For example, if the water temperature is too high, cooperation is broken and algae are released from the coral cells. It manifests itself in the fact that the coral fades. It is a big problem, observed, for example, on the Great Barrier Reef. "Research on the evolutionary history of symbiosis of corals may be useful to determine the cause of dieback of modern coral reefs" - said Prof. Stolarski.