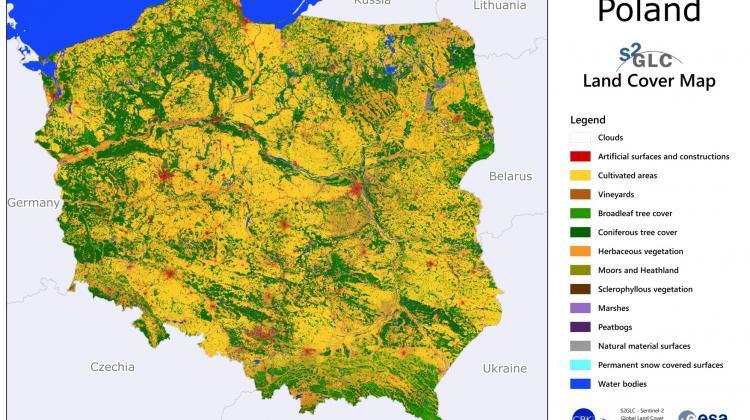 Scientists from the Space Research Centre of the Polish Academy of Sciences have developed a method for automatically and quickly creating detailed global land cover maps. Prototype map, for now only covering Europe, was commissioned by the European Space Agency.

The map shows the state of land cover in Europe in 2017 and takes 13 most important classes into account, including agricultural areas, forests (separately deciduous and coniferous), built-up areas, marshes, peat bogs. As many as 15,000 images from Sentinel-2 satellites were used to prepare it, the Space Research Centre PAS reports.

According to the Space Research Centre PAS release, digital satellite maps of land cover are the modern equivalent of paper thematic maps. Thanks to their digital form, they allow to easily and quickly perform various environmental analyses.

The map was created using a new approach, which shortened its preparation time from about 80 to only 6 weeks. The work required analysing as many as 15,000 satellite images. The resulting map is 2.5 thousand times more detailed than its predecessor.

The land cover classification method that allowed for such great progress was developed by scientists from the Earth Observation Department of the Space Research Centre PAS.

According to the release, researchers used an approach called "machine learning". This means that researchers feed reference data to the algorithm, on the basis of which the computer learns to recognize a given type of land cover anywhere in the world.

Researchers tested their method in China, Columbia, Namibia, Germany and Italy, and used it to generate a new map of land cover in Europe.

Finding the right reference data turned out to be the biggest challenge when developing the algorithm, the Space Research Centre PAS reports. "As a rule, such data must be as detailed as the map based on them. Meanwhile, global databases offered information that was several dozen times less accurate than expected. To reduce the risk of using data with greater uncertainty level, scientists from the Space Research Centre PAS proposed an innovative analytical approach, which ultimately allowed to achieve the accuracy of land cover classification reaching 86 - 89 percent for Europe (93 percent for Poland)," according to the release.

According to the Space Research Centre PAS, the specificity of the used satellite data also contributed to the project`s success. The data came from a pair of European Sentinel-2 satellites launched as part of the Copernicus programme.

Work on the map and the land cover classification algorithm was carried out as part of the three-year project Sentinel-2 Global Land Cover (S2GLC), funded by the European Space Agency (ESA). The Space Research Centre of the Polish Academy of Sciences (project leader; author of the algorithm and data classification software) cooperated with partners from Germany (IABG, EOEXPLOR and the University of Jena) and CloudFerro - the operator of the CREODIAS platform. CREODIAS IT infrastructure has been used to process thousands of satellite images.

The map of Europe developed during the project can be downloaded from the website.