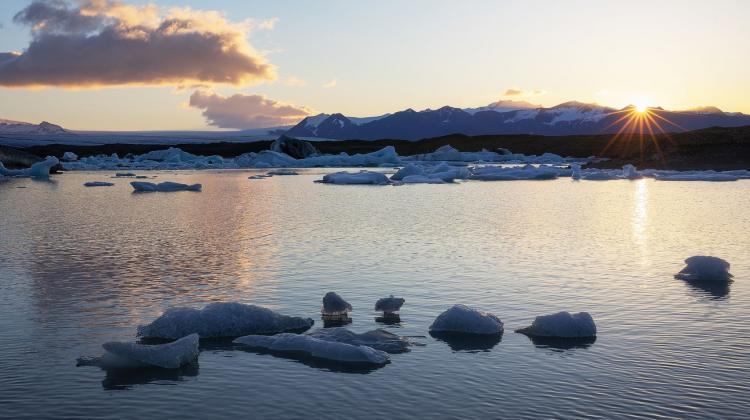 The centre of the Arctic is the Arctic Ocean, which is largely covered by drifting sea ice. This reservoir is surrounded by the North American and Eurasian continents and the archipelagos of islands. Satellite observations and measurements carried out since 1978 allow for accurate imaging and calculation of the Arctic sea ice coverage.

Sea ice changes its range seasonally every year, reaching its maximum surface area in the northern hemisphere at the end of winter, in February/March. The ice cover during that period has an average area of about 15 million square kilometres. The amount of ice is smallest at the end of summer, in September, when it covers about 6 million square kilometres (the average for the years 1979-2019). For comparison, the area of the whole of Europe is about 10 million sq km.

It can be difficult to stop the melting of Arctic sea ice because it is caused by rising temperatures on Earth, caused by rising concentrations of greenhouse gases, among other things. According to Dr. Wawrzyniak, if people reduced emissions, the global climate system should react.

But if this trend is not halted, the effects of dramatically shrinking Arctic sea ice cover will also be felt in Europe, the researcher warns.

He said: “Sea ice in the Arctic is an indicator of the stability of the global climate. Its disappearance has enormous consequences for oceanic and atmospheric circulation. What happens in the Arctic strongly affects the occurrence of extreme phenomena, including droughts and floods, which are becoming more frequent on a global scale.”

The absence of an ice cap causes warm Atlantic water to flow into the Arctic Ocean, which, in turn, raises the air temperature. As a consequence, ocean circulation systems and sea currents change. Arctic air is no longer so cold, which changes the distribution of baric systems (atmospheric pressure). In this way, for example, the inflow of warm air masses from the south to Europe can be unblocked. As a result, millions of people in lower latitudes feel the effects of the disappearance of ice thousands of kilometres away.

Experts note that the Arctic ice may be completely gone in a few decades. In August British scientists published in Nature (https://www.nature.com/articles/s41558-020-0865-2) analysis of the Arctic’s past (the period between glaciations, approx. 127 thousand years ago) and found that, in a similar fashion, the Arctic ice is likely to completely melt by 2035.

Dr. Wawrzyniak said: “Currently, ice loss is 13% per decade compared to the reference period. More open surface means more heat in the ocean and deteriorating conditions for sea ice formation. Climate projections do indicate the loss of sea ice in the coming decades, although even a few years ago, according to sceptics, it seemed impossible. The real disappearance of sea ice is even faster than predicted until recently by climate models, which is why these models are constantly being developed.”

He added that the Arctic Ocean ice sheet is largely no longer perennial ice that can be more than 9 meters thick. Currently, it is thinner ice, cyclically growing in the winter season, which melts easily in the summer season. From year to year, it takes up a smaller area and gets thinner; in many areas it does not form at all.

The year 2020 is also not favourable for Arctic ice cover. In July, the lowest range for this month in the entire history of measurements was recorded. On August 20, the area of sea ice in the northern hemisphere was just over 5 million square kilometres.

Wawrzyniak said: “This is the third lowest result since the sea ice range measurements began. The sea ice area was smaller in 2012 and 2019. A lot of ice-free spaces opened in August in the Beaufort and Chukchi Seas after the storms in July.”

Information on the Arctic ice sheet comes from satellite and aerial observations, as well as historical data dating back to the mid-19th century, including sailing logs from ships sailing in the polar regions.

Wawrzyniak said: “We know that the changes in the sea ice range began to be visible only at the end of the 20th century, as a result of the intensification of the greenhouse effect and the associated warming. The greatest changes have been observed since 2005, when the disappearance of sea ice became more dramatic.”

You can read about sea ice in the region of Svalbard (Norwegian province in the Arctic) and the correlation with air temperature in the publication co-authored by Dr. Tomasz Wawrzyniak: https://rmets.onlinelibrary.wiley.com/doi/full/10.1002/joc.6517