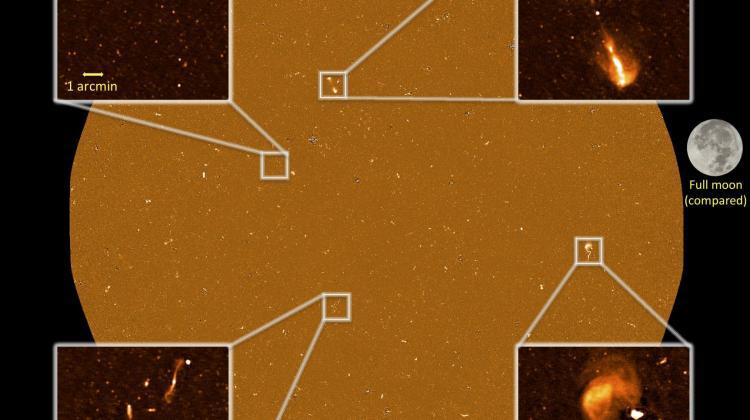 The deepest LOFAR image ever made. It shows the region of sky known as Elais-N1, which was observed for a total of 164 hours, resulting in the detection of more than 80,000 radio sources. Credit: Philip Best & Jose Sabater, University of Edinburgh.

An international team of astronomers including Polish researchers has published the most accurate map of the universe to date in the low radio frequency range. The new sky survey enables scientists to study tens of thousands of galaxies, all the way to the far reaches of the Universe. The LOFAR telescope (a trans-European network of radio antennas, three of which are located in Poland) was used for observation.

Previous radio observations focused primarily on the brightest emissions received from space, such as those from massive black holes at the centres of galaxies. On the other hand, the image obtained with the LOFAR network at low radio frequencies is so deep that most of the objects it reveals are galaxies - like our Milky Way, visible when it was still forming.

Observations on radio waves go deeper into areas with a lot of dust, the clouds of which occur in the star-forming regions and obscure the view in the visible range. Scientists were able to determine the relationship between the brightness of galaxies in the radio range and the rate of star formation. The estimates of the number of new stars that were forming in the young Universe were also refined and emissions from the vicinity of massive black holes in quasars as well as galaxy collisions were examined.

Since the observations of parts of the sky were repeated, it was also possible to study the variability of some sources. That is how astronomers found an exotic star: the red dwarf CR Draconis, in which explosions of radio emission similar to those occurring on Jupiter were detected. They can be caused by the interaction of the star with an unknown planet in its system, or the star itself is rotating extremely quickly.

Huge amounts of data are needed to compile radio images of the sky. In the case of the results in question, signals from 70,000 antennas in the LOFAR network were combined. In total, it was over 4 petabytes of raw data, which corresponds to the capacity of about a million DVDs. The observed area of the sky was approximately 300 times larger than the full moon.

Dr. Katarzyna Małek from the National Centre for Nuclear Research who was involved in the research said: “The map covers part of the northern sky. The observation areas were selected so that they could be used as fully as possible: so-called deep fields, very well known to astronomers, were observed in many different ranges of the spectrum, mainly from ultraviolet to far infrared.”

She added that the map allows scientists to develop more precise evolutionary models and thus describe the young Universe, as well as search for new, hitherto unknown astrophysical objects.

The International Low Frequency Array, or LOFAR for short, is a European network of radio antennas based in Exloo, the Netherlands.

Professor Krzysztof Chyży from the Jagiellonian University said that LOFAR works as a radio interferometer. The signal from a single station (antenna field) is converted into digital data, which are transferred to the supercomputer in Groningen (called correlator) and combined with signals from other stations.

He said: “An interesting fact about LOFAR is that its antennas are stationary, it is not possible to rotate or shift them, as in standard radio telescopes. The choice of the telescope's direction is made by software, through appropriate corrections of the digital signal. From these data, using the Fourier transform, a radio map (image) of the sky is created. This is the whole process in a nutshell, but there are also a number of time-consuming intermediate steps that determine the quality of the maps obtained at the end.”

Three of the 52 LOFAR stations are located in Poland. They were built in 2015 in Łazy near Bochnia, Bałdy near Olsztyn and Borówiec near Poznań. The stations are connected via a fast, specially prepared internet connection to the LOFAR computer centre in Groningen (the Netherlands), to which the observation data are continuously transmitted.

Professor Chyży said: “Our stations have been included in the Polish Map of Research Infrastructure of the Ministry of Education and Science, allowing us to implement the program for further development of this system, LOFAR 2.0. The main goal of the modernization will be to maintain the position of the world's best low-frequency radio interferometer at least for the next decade.”

The results of the LOFAR Two-metre Sky Survey (LoTSS) are presented in a special issue of the journal Astronomy and Astrophysics, which contains fourteen research papers describing how maps are produced and presenting the first scientific results.

The partner countries in the project are France, Ireland, Latvia, the Netherlands, Germany, Poland, Sweden, the UK and Italy. The Polish participation is coordinated by the POLFARO group, which includes the University of Warmia and Mazury in Olsztyn, the Jagiellonian University in Kraków, the Space Research Centre of the Polish Academy of Sciences in Warsaw and the Poznań Supercomputing and Networking Centre in Poznań.

The maintenance of the Polish LOFAR stations is financed by the Ministry of Education and Science.