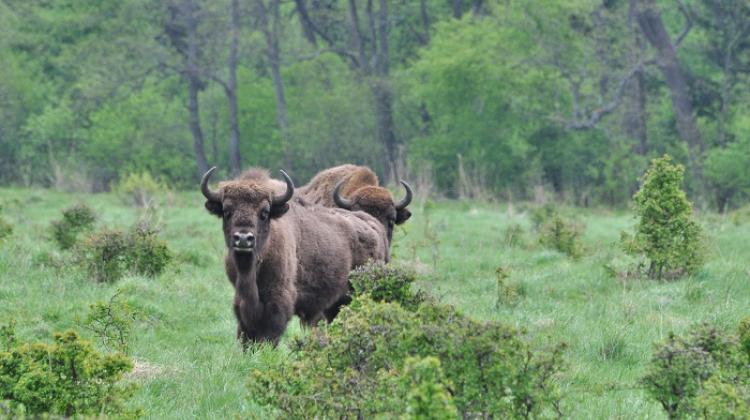 European bison are more effective than other herbivorous at reducing the spread of trees in open areas, scientists from the Mammal Research Institute PAS in Białowieża have found.

As such, the researchers say bison can play an important role in biodiversity protection programmes in Europe.

In the last decades, animal grazing has become a strategy for restoring or maintaining overgrowing meadows and open areas. But because they are easier to control than wild herbivores, domesticated animals like cattle or horses are most commonly used.

But the researchers found that the European bison (the largest land mammal in Europe) and other species of ungulates (elk, deer and roe) have a greater impact on the tree vegetation in the areas open in the Białowieża Forest.

In 30 research surfaces located in non-mowed meadows in river valleys and mid-forest clearances, they measured the density and volume of trees and shrubs. In addition, the frequency of visits and behaviour of ungulates were monitored in each season with photo traps.

They found that the succession of trees and shrubs showed large differences between the studied surfaces. The number of trees changed from a few to to several thousands, and the volume of their crowns ranged from 1 to over 1000 m3 per 1 hectare of meadow.

Dr. Rafał Kowalczyk from the Mammal Research Institute PAS said: “We have investigated how different factors such as the incidence of visits of various ungulates, meadow size or the distance from the forest affect the succession of woody plants in the open areas. We have found that more frequent visits of the bison in the surveyed areas resulted in more than an an eight-time reduction of density and volume of trees and shrubs compared to the meadows not visited by the bison. This dependency has not been observed for other ungulates, among which deer dominated, although they visited the meadows twice as often as bison.”

He added that this was probably related to the bisons’ feeding time, which was on average 56 seconds per visit, almost four times longer than that of other ungulates.

The density of woody vegetation also depended on the degree of openness of the meadow: smaller mid-forest meadows were covered with a thicker woody vegetation than extensive meadows in river valleys and settlement clearances, which is probably associated with the proximity of the forest and a larger volume tree and shrub seeding on its outskirts.

Bison are adapted to open areas. They were introduced into forest environments during the period of restoration of the species after its extinction in the wild. In such places, they prefer mid-forest meadows and river valleys, which offer plenty of plants. When eating meadow vegetation bison also cut tree and shrub seedlings that appear, and thus inhibit their succession in open areas, the researchers said. Other ungulates, which more often eat shoots of already grown trees and shrubs, do not reduce their densities and affect the volume of crowns to a lesser extent.

The European bison, which plays an increasingly important role in the programmes of restoring wild fauna in Europe, can therefore become a relevant wild herbivorous species in the process of restoring and maintaining the overgrowing mid-forest and river valley meadows. Restoring the populations of these large herbivores and restoration and maintenance of open environments with their participation should be a significant part of biodiversity protection programmes in Europe.

The results of the research was published in the journal Forest Ecology and Management.