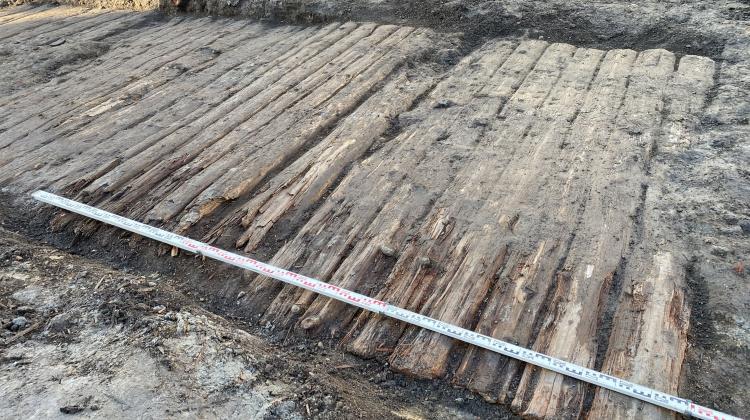 The road was about 3 m wide. Credit: K. Oleszek

A 30-metre wooden road from the 18th century has been discovered in southeast Poland.

Described as one of the longest surviving roads to be found in modern-day Poland, the remnants uncovered in the centre of the town of Jarosław, would have once led to the city gate in the direction of Kraków and Rzeszów.

Archaeologist Katarzyna Oleszek, who examined and laser scanned the road said: “So far, we have been able to uncover a 30-meter-long wooden trail. We know that it was certainly several dozen meters longer, because I found further fragments during archaeological supervisions.”

She added that the 3-metre-wide, one-way road is one of the longest of its kind to be found in Poland so far and as there are no visible traces of hooves or tracks, the wood used to build it - probably oak - was very durable.

The archaeologists also found coins, fragments of soles and nails nearby.

The road consisted of a load-bearing structure in the form of three wooden joists arranged transversely in relation to the lodged beams. The beams were connected with pins.

Oleszak said that because the town was the scene of one of Europe’s largest fairs, attracting up to 30,000 people including fabric, leather and wine merchants, officials had probably spent quite a lot on the road’s maintenance.

Several hundred years ago Jarosław was on the 400 kilometre route from Bielsko Biała to Lviv. The route was built by the Habsburg Austria.

The road was wooden only in the city, outside the city it had a dirt surface.

After removing the wood, archaeologists found that underneath there was an even older hardened road, probably dating back to the 14th century.

Once it has been conserved, the road will go on display in the town’s centre.

Find out more on this page.