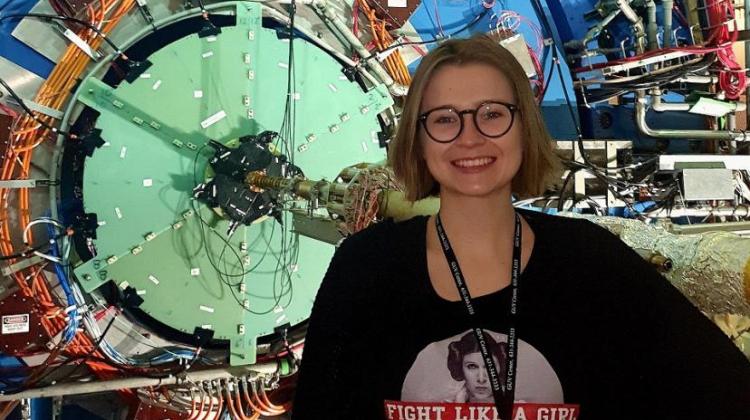 A PhD student at the Warsaw University of Technology has been award by the prestigious Brookhaven Women in Science (BWIS) for her work on the differences between the flow of particles and antiparticles.

Maria Stefaniak's unique research, for which she received the Renate W. Chasman Award, focuses on the study of properties of strongly interacting matter and their transition between the quark gluon plasma (QGP) and the gas state.

Physicist Renate Chasman (1932 - 1977) had a great influence on the development of the particle accelerator physics and her award is aimed at encouraging women to pursue careers in the science, technology, engineering, or mathematics (STEM) fields.

One of the methods used in Stefaniak’s research is examining the matter created in ultrarelativistic heavy-ion collisions. Such research is carried out in the STAR experiment at Brookhaven National Laboratory's Relativistic Heavy Ion Collider (RHIC) Solenoidal Tracker.

Stefaniak investigates the interdependencies between two collective flow effects: elliptic v2 and triangular flow v3. These are the observables characterizing the shape and dynamics of expanding matter.

The PhD student has observed the increasing differences between protons' and antiprotons' v3 with the decrease of the collision energy.

She has performed various experimental tests of the proposed theoretical scenarios to explain differences between the flow of particles and antiparticles, we read on the Warsaw University of Technology website.

Stefaniak is also engaged in multiple scientific projects in cooperation with institutions worldwide. She graduated with a Bachelor and Master of Science from Faculty of Physics of the Warsaw University of Technology, and is currently doing her doctoral studies in the double-diploma BGF Cotutelle programme at Warsaw University of Technology and Subatech-IMT Atlantique in France.

Her research supervisor is Professor Hanna Zbroszczyk from the Faculty of Physics of the Warsaw University of Technology.