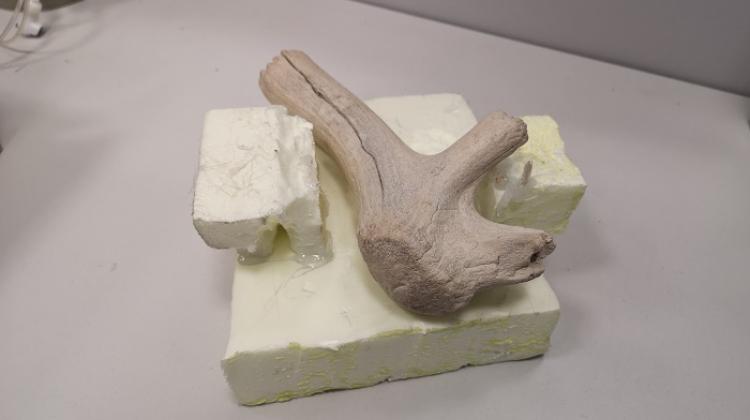 The fragment of a deer’s antler found in a cave in southern Poland was probably used 27,000 years ago as a flint-knapping hammer, say scientists.

By using computed tomography, researchers at the Nicolaus Copernicus University in Toruń were able to analyse the damage resulting from the use of the object, and its original shape was restored based on laser scanning.

The scientists determined that the tool discovered in Cave Biśnik near Zawiercie comes from the Upper Paleolithic period.

Dr. Justyna Orłowska from the university’s Department of Prehistory at the Institute of Archaeology said: “Microtomography allowed us to visualize the cross-sections of individual impact marks. Thanks to this, it was possible to obtain their full characteristics, determine their depths and shapes. It is extremely important from the point of view of traseological research.”

Traces preserved on the surface are related to both its shaping and use, most likely as a hammer for processing raw flint.

The find is one of the oldest examples of this type of objects discovered in Poland.

According to the AGH University of Science and Technology which was behind the technology used to analyse the artefact, the purpose of the CT examination was to identify potential damage to the structure of the object resulting from its use.

Laser scanning recreated the geometry of the antler fragment and compared it with present-day geometry.

The analysis revealed the degree of erosion of the outer surface of the product and its interior and proved, among other things, that the antler was indeed used by humans as a tool.

Dr. Orłowska said: “The use of tomography is extremely important due to the uniqueness and value of archaeological objects and the fact that it is often impossible to interfere with their structure.

“This method, on the other hand, makes it possible to look +inside+ the artefacts without destroying them.”

Scientists from both universities will now compare the damage observed on the artefact with the damage on the hammers used during experimental raw flint processing.