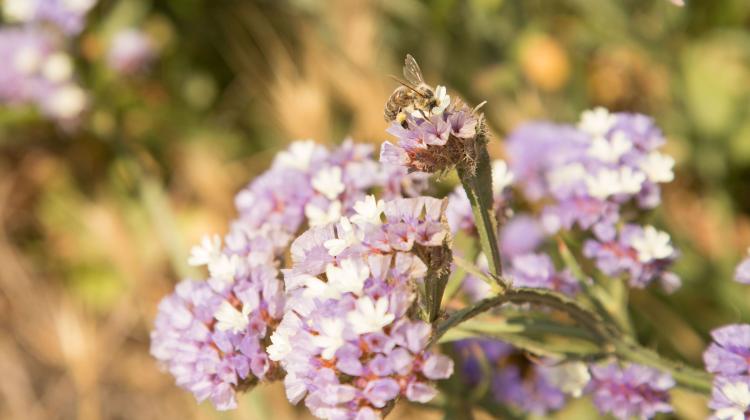 Bees and other pollinators are facing a global threat from ‘human activity’, a leading ecologist has warned.

Professor Piotr Skubała from the Faculty of Natural Sciences of the University of Silesia in Katowice said that due to ‘monoculture farming’, the use of chemicals in agriculture and climate change, the insects which are crucial for the functioning of ecosystems and food production, are now facing a serious threat.

He said: “Pollinators and bees are facing many threats that would cause a real tragedy in the world of insects. All of them are related to human activity.

“Certainly, agriculture is the main cause, because it uses a whole range of chemicals that, to a greater or lesser extent, are lethal to insects. For example, neonicotinoids are plant protection products called 'bee killers’.'

Industrial agriculture and monoculture farming where only one type of crop is grown, leads to lack of plant diversity which in turn poses a danger for bees and insects.

Skubała said: “It is associated with habitat fragmentation, with the hindered movement of insects. They lose a place to live, material for building nests, and they lose food.

“This industrial, monoculture model has dominated the whole world and unfortunately continues to develop. There are attempts in the EU to stop it, but it does not quite work. This is unfortunately a global trend, observed in many countries, in South America, North America, Asia. Of course, there are individual farmers, but there are fewer and fewer of them, they are being pushed out by big business.”

“As a species, we should understand that by allowing such a model, we, humans, are in a losing position. We have destabilized the climate, we will soon lose bees and pollinators, we have contributed to the great extinction.”

This, he added, needs to change. He continued: “It is comforting that in the reports of UN and EU agencies there is a postulate that it is necessary to depart from industrial animal husbandry and industrial agriculture. We are aware of this, but we appear to be powerless.

“One of the elements that may contribute to the dysfunction of our society in its current form are pollinators.

“It is a known fact that the unusual decline in the numbers of bred honey bees is felt in Western Europe: France, Belgium, Switzerland, Germany, the UK, the Netherlands, Italy, Spain, countries where the chemical model of agriculture dominates. Of course it is also seen in North America, China and Brazil.

“On the other hand, when it comes to wild pollinators, and they are much more important than honey bees, we lack knowledge. Research that exists shows an Armageddon in the world of insects, population declines are drastic.”

He added that as a researcher he has not come across any cross-sectional studies on the population of bees and pollinators in individual EU countries.

Magdalena Figura from Greenpeace Polska told PAP that based on research in one country, it is possible to extrapolate to other countries.

She said: “You do not need to study every square meter of the Earth's surface to know that the situation is serious, since it is shown by global or one-country studies. Thanks to this, we have enough information to know that we must act.”

A report by British entomologists warns that 50 percent of known species of insects on Earth have died since the 1970s. Another 40 percent are in danger of extinction. In the UK alone, the butterfly population decreased by 77 percent during that time, and the total insect population by 46 percent.

Professor Skubała said: “The most famous study was carried out in 2017 in Germany. It is so shocking because scientists have studied the abundance of insects in nature reserves and protected areas in Germany, where theoretically there is no chemistry or these dangers. Over the last 25 years, they observed the decline of insects in these areas by an average of 76 percent.

“There were also studies in tropical forests in Puerto Rico, where declines in the number of terrestrial insects in forests amounted to 98 percent. The words Armageddon or apocalypse are absolutely justified.

“Reportedly 2.5 percent of the biomass of insects is lost every year. The rate of extinction of insects is eight times faster than in the case of mammals, birds or reptiles. So this is a very serious matter.”

In June 2018, the European Commission launched an EU initiative concerning pollinators. Its aim is to prevent the decline in the number of wild pollinators in the EU. The initiative covers 10 actions in three priority areas: raising awareness of the decline of pollinators, its causes and consequences, tackling the causes of the decline, and engaging with the public and promoting cooperation.

The importance of insect pollination is enormous: it is essential for plant reproduction, the provision of healthy food and for EU agricultural production worth around EUR 15 billion per year. However, the population of natural pollinators is significantly declining; as many as 1 in 10 species of bees and butterflies in Europe are on the verge of extinction, according to the EC data.

Another problem is climate change. Skubała said: “Warming will cause a further decline in the population of pollinators. The very increase in temperature and extreme weather conditions destroy habitats and food. Flowering of plants is no longer correlated with the development of insects.”