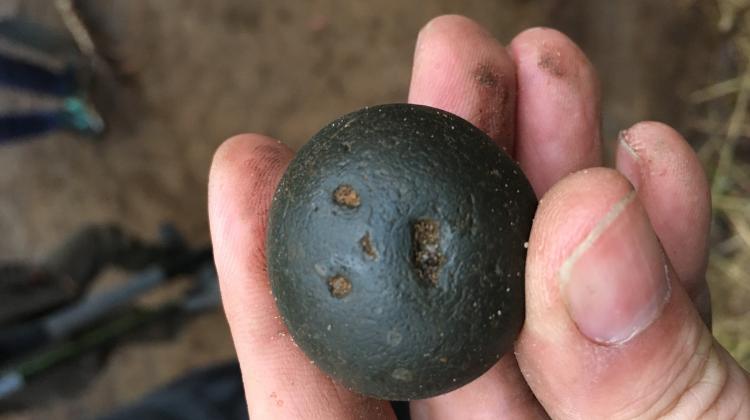 Archaeologists have uncovered a 2,000-year-old grave containing human remains lying one of top of the other, spindle whorls and the remains of distaffs during barrow excavations in the Sarbia forestry district.

The remains are thought to date back to the Wielbark culture and according to researchers the presence of the weaving materials suggest that the bodies had similar professions.

Spindle whorls are weights attached to a spindle, they prevent the threads from sliding and maintain the speed of the spin. They have a hole in the middle. They are usually made of clay, less frequently of stone. In both graves, there were also silver, S-shaped clasps, and similar bowls.

Head of the research project Professor Andrzej Michałowski from the Faculty of Archaeology at the Adam Mickiewicz University, attempted to reconstruct the funeral ritual and the reason for finding two burials under the barrow.

He said: “The body of the deceased was already in a wooden boat, which she used to take to cross to the other bank of the river... It seemed as if she was napping after work, dressed in her best robes. Her chest decorated with a rain of beads made of glass, amber and bone... Pendants sparkling in the necklace. The silver sparkle of the S-shaped clasp on her neck.”

During the excavation, the remains of a box placed at her feet was also discovered.

Michałowski said: “It contained her beloved work tools. A set of professional whorls and two distaffs, so that in the afterlife she would be able to weave the most delicate fog that would move over the valley of the river. Or heavy stormy clouds racing over the edge of the valley... Favourite pins to catch her unruly hair that disrupted her work.”

He added that in his opinion, the spinner's apprentice attended the funeral and during the ceremony threw a pebble with a carved face outline into the grave (archaeologists found such a pebble during excavations).

He said: “She missed her. She, too, wanted to go where the Great Spinner went. Touch the threads again together and magic them into the weaving of fabrics. Since the death of the Master, she knew that she would no longer be able to do this magic with her as before. She saw only one goal... The next day, a fisherman walking towards the river saw a small body floating on the waves.”

After the apparent suicide, the spinner's apprentice was buried in the same barrow where the Great Spinner had been buried.

Michałowski said: “For her journey, she received her whorls, reminiscent of flowers or stars hanging on the riverside sky on a summer night, and a small distaff. A small S-shaped clasp glimmered in her burnt remains. A small bowl rested in a dug pit.”

He added: “Only the stone with a face really knows the truth.”