Through the looking-glass: Studying the 'life' of chiral molecules 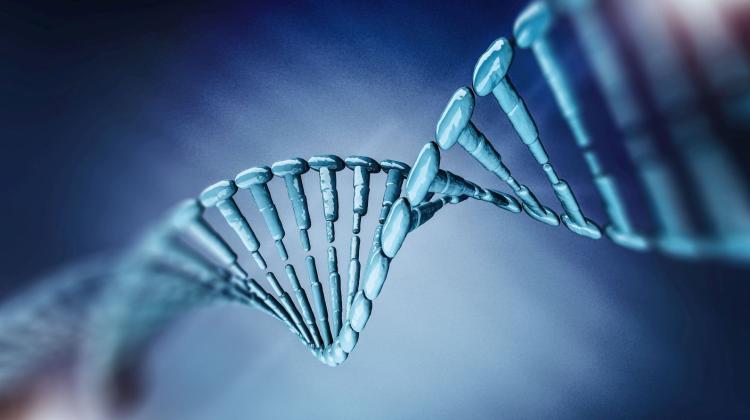 Our bodies are built from many left- and right-handed chiral structures. Among them are left-hand amino acids and the right-handed DNA helix. But what would life look like if the chirality of structures, from which our bodies are built, were reversed? If a living organism suddenly went through the looking-glass? To answer this question, researchers from the University of Lodz have been studying the behaviour of chiral molecules on a single molecule scale.

Each living organism is built of chiral structures that are characterized by the fact that their mirror image is different and cannot be superimposed onto the original object. Proteins, fats, sugars, enzymes, hormones, DNA chain are examples of such chiral bricks living organisms are made of. A single molecule and its distinguishable mirror image form a pair of enantiomers that are characterized by different chiraloptic properties.

Dr. Paweł Krukowski from the Faculty of Physics and Applied Informatics of the University of Lodz said: “A great mystery of life on Earth is the fundamental question of why some structures occur only in one configuration, for example, why amino acids are left-handed, they occur only in L ('left') configuration, and sugars are right-handed with D ('right') configuration? Why the DNA helix is always right-handed and never left-handed in living organisms? So far no one has been able to unequivocally answer this fundamental question about the substance and formation of life on Earth.”

To find out, together with researchers from the University of Osaka, the scientists conducted intensive research on the nanoscale molecular chirality, at a single molecule level, using a scanning tunnelling microscope (STM). Research is carried out as part of the SONATA BIS 7 scientific project financed by the National Science Centre.

Researchers from Dr. Krukowski's team study chiral helicene molecules in the form - as they describe - right and left-handed springs. These are organic compounds characterized by strong spontaneous chiraloptic properties, and for years they have been used to build photovoltaic cells and LEDs.

Dr. Krukowski said: “The microscope enables us to obtain a fantastic spatial resolution. We can observe and identify even a single chiral molecule adsorbed on a flat metallic substrate. This approach is rare due to the difficulty of conducting such research.”

As a result of the interaction between different molecules of the helicene, and between the surface and the molecule, a spontaneous molecular segregation may occur.

Researchers are investigating the intermolecular interactions of chiral molecules of the helicene and explain the phenomenon of spontaneous segregation of individual enantiomers, in which cases it takes place and in which it does not. In the future, this type of research can facilitate, for example, designing efficient OLEDs.

Currently, researchers are building a special, globally unique TERS-STM spectrometer operating in ultra-vacuum and at a cryogenic temperature that can enable great progress in this research. This device combines the atomic spatial resolution of an STM and chemical identification possible with Raman spectroscopy.

Krukowski said: “The new spectrometer will be a breakthrough in identifying individual chiral molecules adsorbed on the surface based on the analysis of the degree of circular polarization of the light scattered on a single molecule.”

The scientists want to verify the results they have obtained so far using the newly-created TERS-STM spectrometer.

Research and identification of enantiomers is a very important issue for chemists, biologists, physicists and the pharmaceutical industry. An example of this is the history of a headache and nausea drug called thalidomide from the mid-20th century. After a series of adverse side effects of this drug in pregnant patients and their children with serious development defects, research showed that the right-handed chiral molecules were very dangerous for human health, while the same molecules, but left-handed, were an effective drug. Since then, huge financial resources have been allocated in the world to develop an effective method of separation of enantiomers, i.e. separating the left-handed molecules from the right-handed molecules.