Early symptoms of earthquakes and tsunamis visible in ionosphere 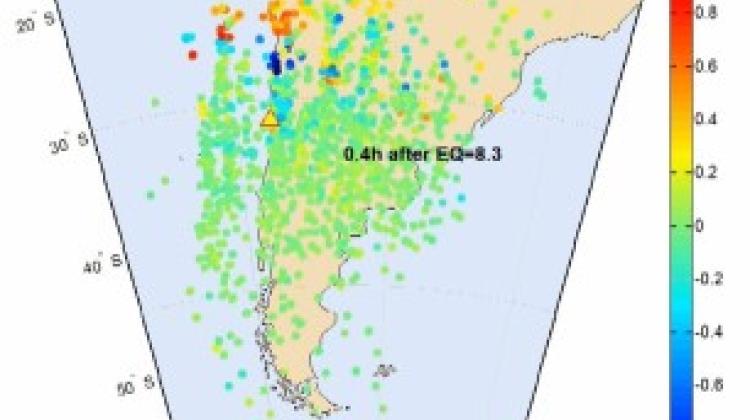 Electric field interference in the ionosphere caused by gravitational waves less than half an hour after an earthquake in Illapel, Chile; Source: the University of Warmia and Mazury

Ionosphere monitoring allows scientists to detect the first harbingers of natural disasters, such as earthquakes, tsunamis or floods.

Researchers have long known that the ionosphere reacts to earthquakes, tsunamis, volcanic eruptions and nuclear explosions. They cause specific changes in the electromagnetic field of the ionosphere (the ionised layer of atmosphere above 50-60 km above the surface of the Earth).

The characteristic circles in the ionosphere were visible, for example, during the 2011 earthquake and tsunami in Japan in and the 2015 earthquake in Illapell, Chile.

But now a team of international scientists led by the Department of Geoengineering of the University of Warmia and Mazury in Olsztyn have found new evidence that monitoring the ionosphere and catching the precursory signals can predict such events.

The project named COSTO (Contribution of Swarm data to the prompt detection of Tsunamis and Other natural hazards) provides a more accurate observation, characterization and understanding of interaction processes between the ionosphere, magnetosphere, lower atmosphere, the surface of the Earth and sea level, using the observation of the electric field by the geomagnetic research mission SWARM satellites.

Team leader Dr. Wojciech Jarmołowski said: “The key to using this type of observations in the future is the existence of a dense satellite network and ground GPS receivers.

“The ionosphere is best monitored with a signal from many stations. The fact that it is the right direction and conducting such observations makes sense is confirmed, among other things, by the example of the 2011 earthquake in Tohoku, Japan, where thanks to the observed signals, many people could be evacuated.”

OBSERVATIONS WILL HELP TO EVACUATE PEOPLE

He added that Japan has approx. 1200 receivers and that future research will aim to create a system of predicting natural disasters around the world.

Jarmołowski continued: “Developing ionosphere observations while working with seismologists, as well as the analysis of the entire process will, probably step by step, lead us to predicting such phenomena with high accuracy.

“The numbers of both satellites and terrestrial receivers are constantly increasing, and so new observation sites are being added."

The COSTO project focussed on the detection of ionosphere interference caused by earthquakes and tsunamis, observed in the data recorded by SWARM satellites and other low orbit research satellites (GOCE, GRACE).

The research was carried out by a consortium composed of: the University of Warmia and Mazury in Olsztyn (main contractor), the National Observatory of Athens, the Technical University of Munich and the Polytechnic University of Catalonia.