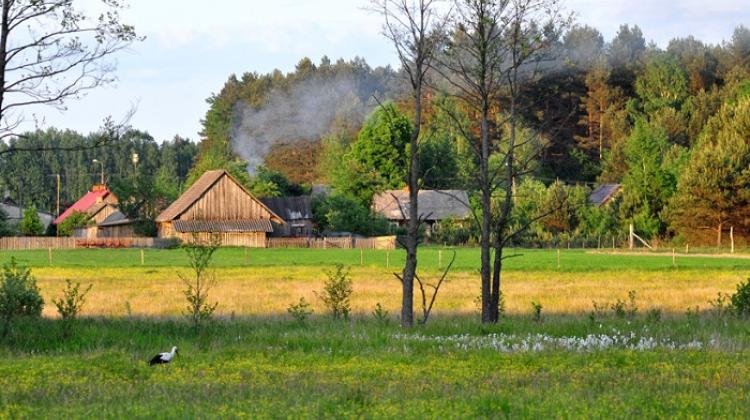 The modernization of farms has led to a decline in the number of birds in Polish villages, say scientists.

In addition to agricultural intensification having a negative impact on biodiversity, researchers from Poznań, Kraków and Sweden found that the renovation and insulation of old residential buildings and outbuildings was the main reason fro the decrease.

The team from the Adam Mickiewicz University in Poznań (AMU), the Swedish University of Agricultural Sciences in Uppsala (SUAS), the Poznań University of Life Sciences and the Institute of Nature Conservation PAS in Kraków found that modern villages and their surrounding fields had 50-60 percent fewer birds than traditional, old villages and their agricultural surroundings, while the effect of intensification was only visible for some groups of birds nesting in the fields.

When it comes to drops in the number of birds living near farms, according to the predictions of statistical models, the modernization of the village and intensification of agriculture contributes to it in 88 and 12 percent, respectively. But according to the predictions based on declines in the number of birds nesting in open agricultural areas, the share of the two processes is 56 and 44 percent, respectively.

Presenting the results of their work in Conservation Letters, first author Dr. Zuzanna Rosin from AMU and SUAS said: “Our main conclusions disprove the view persisting for decades that agricultural intensification is the only reason for the decrease in the number of birds in agricultural landscape. This applies to both bird clusters in villages and, surprisingly, birds from nearby fields.

“Of course, agricultural intensification has a large, undisputed impact on bird biodiversity, especially in the fields. But it seems that changes within villages are a key factor for many species; a factor that has so far been ignored in research.”

Earlier, it was found that the more 'modern' the village, the fewer birds live in it, such as sparrows or swallows that need nesting places in buildings. Traditional, small farms, with a few cows, pigs or poultry, are slowly becoming history.

And, as Dr. Rosin emphasizes, they were the ones that provided birds with nesting places and a food base in the form of scattered grain or insects accompanying farm animals. Modernized and new farms are effectively secured in this respect as the grain is stored inside and swallows that used to nest in cowsheds no longer have access to their interiors.

Dr. Rosin said: “One of the most important discoveries of our new study is that, along with the increase in the level of village modernization, there is a decline in the number of birds from the group related to the mosaic of fields and mid-field tree clusters, such as the yellowhammer, greenfinch and corn bunting.”

Another group of agricultural landscape species are birds nesting on the ground in open fields, like the skylark, yellow wagtail and partridge.

Rosin said: “These birds like open areas and their numbers increase with the distance from villages. It is possible that there are fewer of them near villages, because this means the presence of predators, cats and corvids. But even in this group you can see the impact of modernization.

“We should compensate for breeding sites destroyed during warming or renewal of façades. There are simple solutions, such as hanging breeding booths after the renovation of the building.”

She added that closing outbuildings swallows from nesting inside is pointless, often in violation of nature conservation regulations and harmful not only to birds. It also leads to an excessive growth of insects that are a burden to people and animals, which under normal conditions would be caught by swallows and other species of birds. The trend to keep hens or cultivation of household gardens for own need in suburban areas can partially compensate for the negative changes related to the disappearance of small farms.

The study authors also recommend supporting small family-based farmsteads and including measures aimed at improving or conserving important habitats linked to villages and rural settlements in the European Green Deal.

Rosin continued that modernization as such is needed because it helps to improve the quality of life of the residents, but added: “If it causes a drop in biodiversity, the ultimate life quality increase balance turns out to be lacking.

“A large variety of birds means more than just pleasant singing. It is also a control of crop or garden pests, as well as the circulation of elements and a whole range of other ecosystem services, which we know about but can not yet determine their value.

“Birds are a good indicator of the condition of the environment we live in and depend on - we and our health. We are not separate from nature, even if we live in warm houses and buy everything in stores. Every ecological disaster also means an economic disaster for humans. Besides, the nature itself is a value, regardless of us and our needs.”