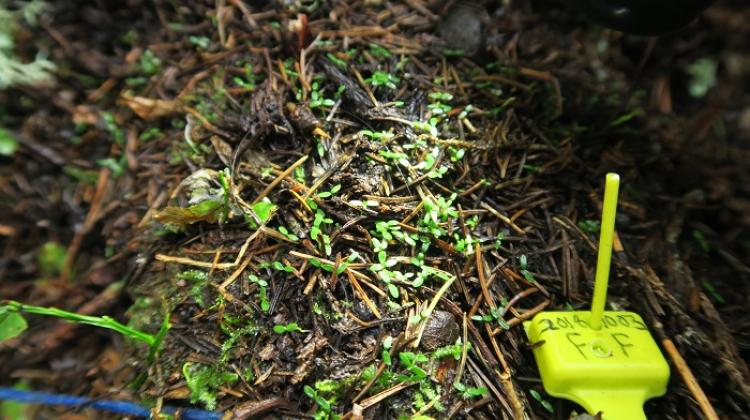 Researchers investigating the reproduction cycle of bilberry shrubs have found that bear faeces helps the shrub’s seeds to grow.

To understand the reproductive strategy of clonal plants better, scientists from the Institute of Nature Conservation PAS studied the droppings of animals in the Tatra Mountains that enjoy eating the shrub’s berries.

After two years, the researchers returned to the spots where the animals had defecated and counted the seedlings that had germinated on the surface one square meter around the animal faeces.

Co-author of the study, Nuria Selva said: “The reproductive strategy of clonal plants has intrigued scientists and naturalists for decades. Many of these plants invest much energy each year to produce large amounts of fruits with seeds, and yet their seedlings are rarely found in the field.

“We found germination strongly associated to the locations where frugivores had defecated: bilberry seedlings were detected in 100%, 88% and 50% of brown bear, mesocarnivore and passerine faeces, respectively.

“These numbers were significantly higher than those found in control areas located in the vicinity of the faeces.”

Further research conducted that 16% of the seedlings from bear faeces survived at least one year.

The largest numbers of seedlings was associated with bear scats (154.4 ± 237.3 seedlings/m2), especially those defecated upon the soil disturbances these animals created next to their resting sites (360 ± 277 seedlings/m2).

Co-author Alberto García-Rodríguez said: “Bears excrete close to their resting sites, where they scratch plants and expose the soil. This behaviour helps the seeds better survive in faeces and germinate. We found that in the places of bear scats, related to the resting sites of these animals, there were up to 15 times more germinated bilberries than in the faeces left in other areas.

The study authors also found that bilberry seedlings also appeared in places with bird droppings (half of the labelled samples) and in more than 85 percent of fox and marten faeces.

Nuria Selva said: “This confirms that a diverse community of animals distributing seeds is crucial for the survival of plant populations.”

In the laboratory, bilberry seeds also germinated better after being excreted by mammals or birds than when they developed directly from a 'clean' fruit.

Nuria Selva continued: “Our study may shed light on this blueberry paradox, which has intrigued scientists for decades. In temperate and boreal Europe and Asia, many of animals eat plenty of blueberries, spreading their seeds. At the same time, we rarely see blueberry seedlings in the field.

“What we see in the laboratory is sometimes something completely different than what happens in nature. That's why we decided to monitor animal faeces in the field and the survival of seedlings from these faeces.”

Commenting on their results, the researchers said that 'seed dispersal by animals facilitates repeated seedling recruitment of clonal plants in natural conditions, suggesting that frugivores must be considered when analysing the reproductive strategies of these species'.

The research was carried out as part of the BearConnect project. The results were published in Ecosphere.

Find out more about bear research on the Carpathian Brown Bear project website.