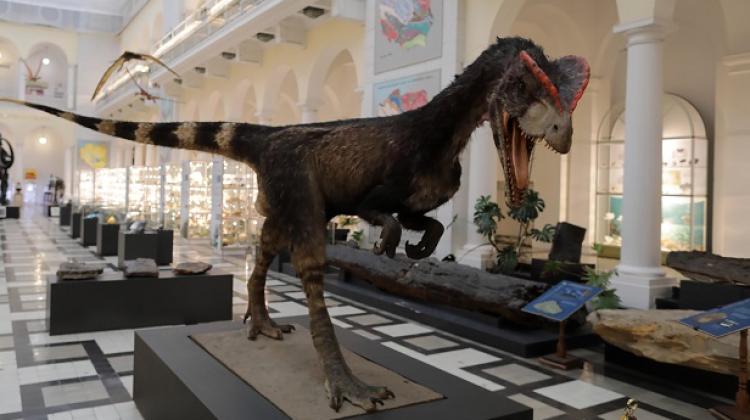 Warsaw, 13.12.2021. The Geological Museum of Polish Geological Institute - NRI in Warsaw where the press conference 'Dinosaurs in Mazovia. Discovery of globally unique fossils' was held. The conference was combined with the presentation of the original rock materials. (az/doro) PAP/Albert Zawada

Palaeontologists have found hundreds of fossilised dinosaur footprints dating back 200 million years in a clay pit in Poland.

The discovery, which scientists say could be the largest collection of dinosaur tracks in Europe, was made near the village of Borkowice in the centre East of the country.

Dubbed a real life ‘Jurassic Park’, the footprints were found embedded in around 60 blocks, but scientists believe there could now be thousands more.

Making the initial discovery in July 20121, he added: “At first, we did not know whether there were only those few torn plates, or whether this layer would continue. We returned in September and it turned out that there were two levels of fossils, and that it was a mass accumulation. We were finding more and more plates.

“We realized that this site was exceptional, if only because of the amount of palaeontological record: this layer extends over a hundred meters! It's not about its depth, but its extensive surface.”

Co-discoverer Professor Grzegorz Pieńkowski from the Polish Geological Institute said: “We have to think what to do to preserve this site for future generations. Agricultural or forest reclamation should be abandoned in order to make these finds available for the world to see and thus promote knowledge of the Earth.

“In the future, a depository of specimens and an open-air exhibition of +Mazovian+ dinosaurs should be created. Through them, you can transfer the knowledge of Earth, climate change and the environment; great extinctions and evolutionary rebirths. A person strolling through the quarry in Borkowice should associate the place with a Baltic beach.”

The dinosaur experts said that a preliminary inspection of the fossils gave them hope of identifying new dinosaur species and their dietary habits.

With numerous remains of plants in Borkowice, they plan to work with palaeobotanists to recreate the base of the dinosaurs' food chain.

The discovery will also enable a better understanding of the early Jurassic stage of dinosaur evolution. Until now it was difficult because of the small number of sites rich in tracks and bones from the period.

The first discovery of dinosaur tracks in Poland was made 61 years ago by Władysław Karaszewski from the Geological Institute. In the following years, tens of sites and hundreds of tracks have been discovered. However, for a long time it seemed that in Poland there were no more chances for new, spectacular discoveries of remains of the Jurassic dinosaurs. That changed this year.