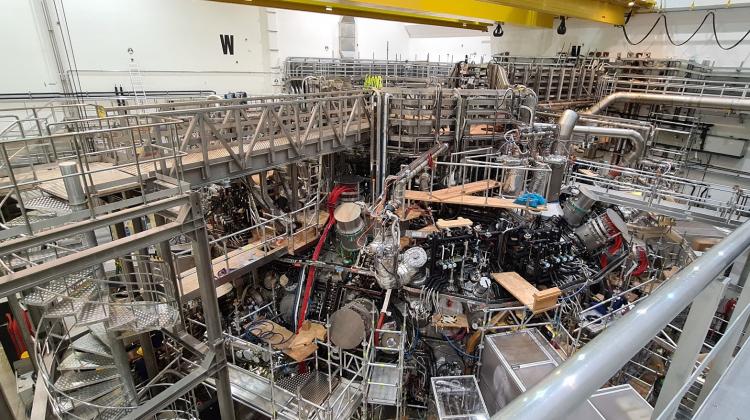 Doctoral candidate Bartłomiej Jabłoński from the Lodz University of Technology is a member of the team that will work on a system monitoring the production of fusion plasma. Jabłoński is the only Polish winner of this year's EUROfusion Engineering Grant (EEG).

The European organization EUROfusion awarded 15 grants in the competition for projects solving scientific problems related to thermonuclear fusion. Researchers around the world are working on reactors producing energy from thermonuclear fusion, commonly referred to as 'artificial suns'.

The supervisors of the grant, awarded to Bartłomiej Jabłoński are professors at Lodz University of Technology: Dr. Dariusz Makowski and Dr. Wojciech Tylman. The research will be carried out in cooperation with scientists from foreign centres, including Dr. Marcin Jakubowski from the Max Planck Institute for Plasma Physics in Greifswald, Germany, Dr. Raphael Mitteau from the CEA's Nuclear Research Centre, and scientists from ITER France.

They are working on a system that will employ artificial intelligence to control plasma and secure tokamaks and stellators. As part of a three-year grant, the researchers will develop real-time image processing methods. They will investigate how to use machine learning and neural networks to protect and control devices that produce fusion plasma.

Dr. Dariusz Makowski from the Department of Microelectronics and Computer Science, Lodz University of Technology said: “The developed image acquisition devices, algorithms and IT solutions will be practically tested in devices used to generate plasma and carry out controlled thermonuclear reactions in the Wendelstein 7-X stellarator, which is currently being launched in Germany, and in the WEST tokamak in France.”

The results of the project are crucial for future fusion devices such as the ITER tokamak under construction in France, or the DEMO fusion demonstration power plant under development that will produce electricity for commercial use.