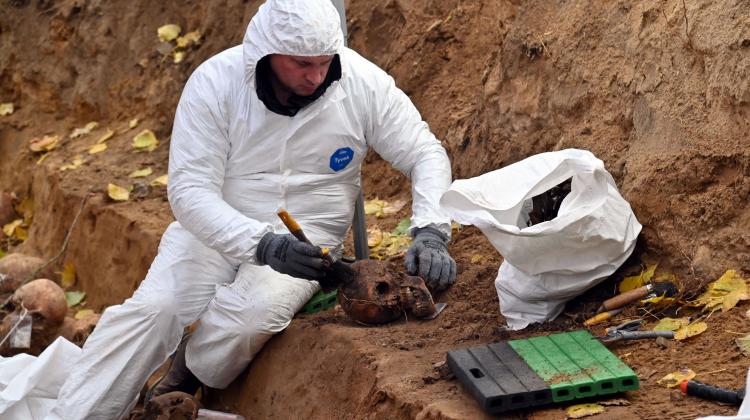 Researchers from Szczecin want to determine the cause of the death of 64 people whose remains have been found in the former Stalag II-D camp in Stargard (West Pomerania). The POWs died within four consecutive days, but there are no traces indicating, for example, that they were shot.

'During research in Stalag II-D, we found several dozen mass graves. We carried out exhumation in one of them and found the remains of 64 men. Based on the analysis of collected evidence, artefacts, we can now say that most of them were Red Army soldiers', says Dr. Andrzej Ossowski, head of Department of Forensic Genetics at the Pomeranian Medical University in Szczecin.

He adds that the items discovered in the grave include fragments of Polish and Belgian soldier uniforms, but at this stage it is not possible to confirm that those soldiers were also buried there.

Based on the Red Army soldiers data published by the OBD Memorial project, the researchers determined that the prisoners died within four consecutive days, in December 1941.

Preliminary findings also indicate that death occurred as a result of exhaustion, but scientists want to investigate it in more detail - precisely because of the short time, in which so many people died.

'The scale is incredible - a dozen or so people per day died in the camp. There are no traces that would point to a brutal death mechanism - shooting or torture, which we have seen during our work in Stutthof, Treblinka or Sobibór', explains Ossowski.

According to Ossowski, exhaustion made prisoners susceptible to infectious diseases, such as typhus. 'We plan to carry out pioneering testing for the presence of pathogens in the preserved bone material - so far, no one has done that in Poland', the geneticist says.

He adds that research in the former Stalag II-D will continue. The researchers assume that the 64 prisoners found in the grave are not the only such victims.

'It was not a concentration camp or extermination camp. It was a POW camp. This shows the scale of the criminal system, and we can talk about a mass scale of death in POW camps. This is a terrifying image showing the enormity of criminal action. It was extermination through the conditions, to which prisoners of war were exposed - hard work, malnutrition, lack of any medical care', emphasises Ossowski.

He notes that research is also underway to determine the identity of prisoners of other nationalities, about whom the researchers have very little information at this point. He also points out that in the case of soldiers of the Red Army, although their fate was known, the communist system never informed their relatives.

'After taking possession of the German documentation, Soviets did not inform families what happened to their relatives - despite the fact that, as can be seen in the documents, even their addresses were recorded. The authorities allowed to brand the relatives of Soviet POW +families of traitors+', the geneticist says.

The work that began in October 2021 is the first comprehensive research in the former camp. Earlier, the Military Property Agency, which owns the area, conducted surveys after history enthusiasts determined the approximate location of the burial site in the complex.

Stalag II-D was one of the largest POW camps in the Third Reich. From 1939 (initially it operated as a temporary camp, Dulag L), prisoners from all over Europe were sent there, soldiers and non-commissioned officer, including soldiers from Gen. Kleeberg's Army, as well as other Polish soldiers, French, Belgian and Soviet soldiers. POWs from the camp worked on work details all over Pomerania, including farms and road construction. Many of them died during labour and were buried near the place of work. The camp functioned until its evacuation in February 1945.

Research in Stalag II-D was co-financed by the Ministry of Culture and National Heritage. (PAP)