A step towards an osteoporosis vaccine 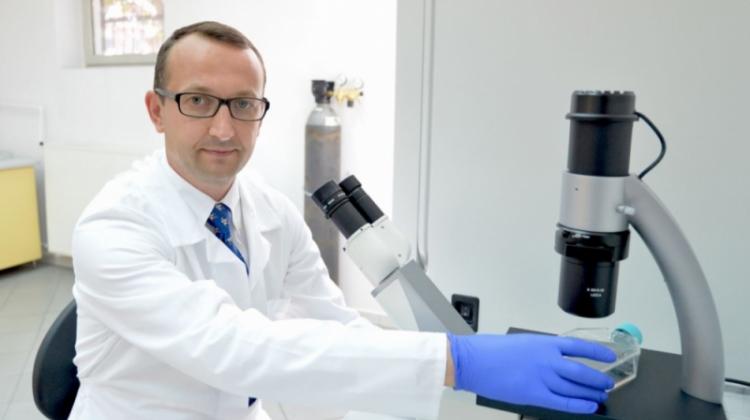 Researchers from the Wrocław University of Environmental and Life Sciences are working on a biomaterial with mRNA, which will inhibit the process of bone tissue deterioration in osteoporosis and induce the reconstruction of the missing bone material. They hope that with this technology they will be able to develop a vaccine against osteoporosis.

Osteoporosis is a metabolic disease of bone characterized by low bone mass, micro-architectural deterioration of bone tissue and, consequently, increased bone fragility and susceptibility to fractures. In the initial stage, the disease is asymptomatic, which is why osteoporosis is called a silent bone thief. Every third woman after menopause suffers from osteoporosis - the risk of bone fracture is approx. 40%, while in men it is approx. 13-22%.

Professor Krzysztof Marycz intends to reverse the bone resorption process by using mRNA technology. The project received the highest funding in the Tango 5 competition of the National Centre for Research and Development. According to the researcher, this technology could revolutionize the approach to the treatment of osteoporosis.

Even before the pandemic, Professor Krzysztof Marycz and a veterinarian Paweł Golonka proposed a similar technology, at that time without mRNA, for filling subchondral cysts in horses. 'The results of clinical trials were spectacular and I started to think about how to use this experience in the search for therapeutic solutions for people', Marycz explains.

Horse riding is Marycz's non-scientific passion. It was thanks to horses that the researcher came up with the idea to reverse the bone resorption process by using mRNA molecules and/or small non-coding RNA molecules (microRNA/miRNA). miRNA molecules regulate the level of mRNA acting at the post-transcriptional level, having a direct impact on the expected therapeutic effect.

The professor proposed to use inorganic technology to protect organic molecules: mRNA is expected to inhibit osteoclasts and promote osteoblasts at the site of a bone defect.

'This is a radical change in the way of thinking. Until now, the idea was to supply calcium to the bones. I am going to use the cells that produce this calcium, because the problem of osteoporosis are overactive bone-eating cells. In turn, those that build it and enable the deposition of calcium in bones are clearly weaker', explains Professor Krzysztof Marycz.

The researcher came up with the idea to block osteoporotic cells - osteoclasts, and activate osteoblastic cells at the post-transcriptional level. The expected result is that they will deposit key proteins in the bone matrix and promote calcium deposition, thus building bone at the site of the defect.

The professor adds that the revolutionary aspects of this method consist not only in reversing the process that takes place in the bone, but also in the precision of locating this process and its regulation. The biomaterial with mRNA will be introduced into the place of a specific defect, and the doctor will control the order of activation: first, microcapsules of mRNA that inhibit osteoclasts will open, and then the ones with mRNA, which will stimulate osteoblasts to act.

Another novelty is the material, in which the mRNA will be placed. In currently used solutions, mRNA is suspended in lipids. In the nes solution, the researchers will use hydroxyapatites - inorganic compounds with magnetic nanoparticles.

The project includes pre-clinical and clinical trials on approximately 15 patients over 60 years of age, treated for craniofacial bone defects, periodontal diseases or with impaired bone metabolism, including osteoporosis.

'I hope we can reach the third stage, which is an osteoporosis vaccine. If it was possible to give humanity a vaccine against SARS-COV-2 in 15 months using mRNA, then this dream is not unrealistic at all', says Professor Krzysztof Marycz.

The research project is carried out by the consortium of the Wrocław University of Environmental and Life Sciences, the Institute of Low Temperature and Structure Research PAS and Vivadental.