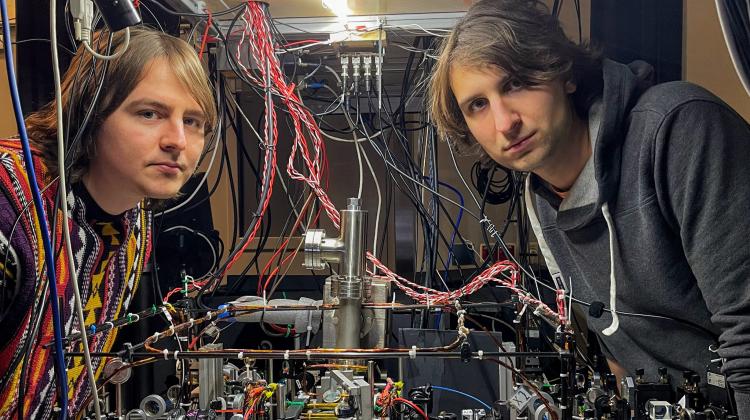 A few years ago, physicists from the Centre for Quantum Optical Technologies and the Faculty of Physics of the University of Warsaw designed and built the first quantum memory in Poland, which they later developed into a quantum processor.

'Our processor is based on a cloud of cold atoms. They can efficiently store and process information from light', describes Dr. Michał Parniak, head of the Quantum Optical Devices lab, quoted in the Centre of New Technologies UW press release.

Now, in the paper published in Nature Communications (https://due.org/10.1038/s41467-022-28066-5), doctoral candidates Mateusz Mazelan and Adam Leszczyński with Dr. Michał Parniak show that this device can solve real problems that with standard processors could not tackle: it can be used as a component of an ultra-high resolution spectrometer.

'We as much information as possible from individual photons. The measurement becomes very efficient', comments the first author Mateusz Mazelan.

The light that reaches us from various objects carries plenty of information, for example about matter from which these objects are built. This information is visible in the spectrum of light (spectrum becomes visible you can see, for example, after light is disperses in a prism).

For example, the light that comes from a star contains information about the elements that this star contains (which is how we know what the stars in other galaxies are made of). And if the light passed through a solution or material, we can determine the composition, for example whether the solution contains any toxins. Science that deals with obtaining and analysing such information is spectroscopy (also called spectrometry). It is used on a daily basis by biologists, physicists, astronomers, chemists or doctors, we read in the press release.

Spectroscopy has a significant limitation called the Rayleigh criterion limit. It means that the information from light can not be extracted with infinitely high accuracy. Some signals hidden in the spectrum, called spectral lines, may be so similar to each other that traditional optical spectrometers are not capable of distinguishing between them.

'Our device and algorithm not only allow to better extract the information carried by light, but they could allow to better +push+ information into light', says Dr. Pariak. He points out that this idea could also be used in solutions for telecommunications, where efficient recording and reading of information in light becomes more and more significant.

Although ideas on how to circumvent the limits of spectroscopy have already appeared in the world, researchers from the University of Warsaw showed how to do it in a completely unconventional way: using quantum solutions. Where classic physics fails, quantum physics may offer a whole spectrum of new opportunities.

Physicists from the University of Warsaw have built a device that allows to achieve high resolution spectroscopy (15 kHz, or forty parts per billion) while using a small amount of light from a given object. 'Our spectrometer beats the classic limit while using 20 times less photons than a hypothetical traditional spectrometer' says Mateusz Mazelan. 'Our record is also absolute, because a classic device with a similar resolution simply does not exist'.

The processor built at the University of Warsaw uses a cloud of billions of cooled rubidium atoms placed in a vacuum for logic calculations. If these atoms are placed in the magnetic field and illuminated with a laser, they can be controlled so that specific logic operations are performed. They can, for example, process information about the spectrum of the light they are illuminated with.