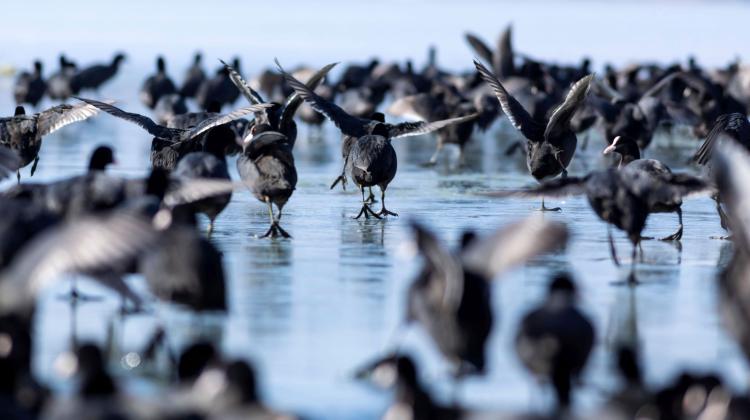 Scientists from the Faculty of Biology and Environmental Protection of the University of Lodz investigate how urbanization affects changes in bird organisms at the genetic level and how their resistance changes due to living in an urban environment.

The research in the National Science Centre funded project 'Microevolution of life in cities - genetic mechanisms of animal urbanization processes' is conducted on the example of the Eurasian coot - a common water bird that nests in reeds.

A team of scientists from the Department of Biodiversity Studies, Teacher Training and Bioeducation led by Professor Piotr Minias has been studying process of urbanisation of these birds for nearly a decade. The researchers will now focus on how urbanization affects changes in their organisms at the genetic level. They will also check whether the immune system functions differently in the environment changed by humans.

According to Professor Piotr Minias, urban fauna studies indicate a whole range of changes at the hormonal, physiological or immune level. It is known that at least some of the adaptations should be recorded genetically by microevolutionary changes - small DNA changes that can significantly improve the functioning of individuals in an urban environment.

'Behavioural plasticity, the way that an animal adjusts its behaviour to new conditions, is quite easy to observe, and research on this subject is conducted around the world. However, we do not know if behavioural changes result only from this plasticity, or maybe they have a genetic background. That is what we focus on in this new research project', he explains.

He adds that research is conducted on behavioural genes, those that scientists already know to affect behaviour. 'We will check, for example, whether the tendency to aggressive behaviour has a genetic background', he says.

The scientists from Łódź also want to check what happens with individuals that have already penetrated cities. 'Does the exposure to a completely different environment result in recording certain changes at the genetic level?' Minias explains.

The team of biologists will also look for new genes that can be responsible for yet unrecognised adaptations of birds to life in an urban environment. The research results will expand the knowledge about mechanisms and processes determining the effective adaptation and functioning of animals in the close vicinity of humans.

The project leader explains that indicated that the Eurasian coot is the research object because this species that is currently undergoing the process of urbanisation. 'It is now penetrating the cities of Central Europe', he says.

The project will continue until 2026. It is conducted in four Polish cities: Łódź, Warsaw, Poznań and the Silesian Agglomeration, and in four non-urban areas.

'We are at the preliminary phase of research, collecting research material. We will finish collecting data this year. Later, we will focus on laboratory an genetic analyses to compare populations associated with various environments', says Professor Piotr Minias.