Professor Andrzej Wyrwa: Ostrów Lednicki is the most probable location of the Baptism of Poland 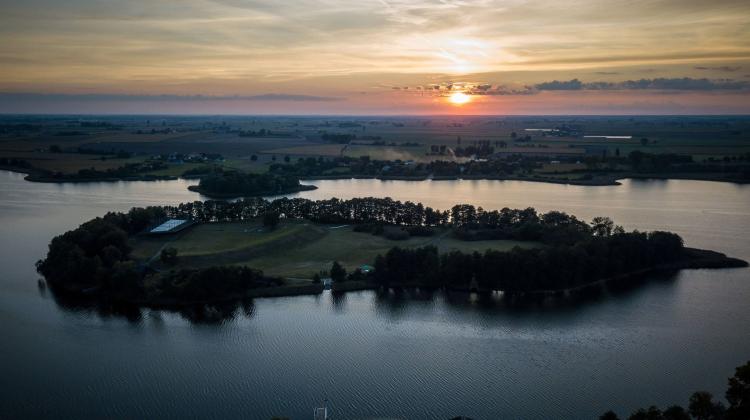 Recent research confirms that Ostrów Lednicki is the most probable location of the 966 baptism of prince Mieszko I, says the director of the Museum of the First Piasts on Lednica, Professor Andrzej M. Wyrwa. The Polish Baptism Day is celebrated on April 14.

It is assumed that the Baptism of Poland took place on April 14, 966. In April 2016, Poznań, Gniezno and Ostrów Lednicki in Wielkopolska hosted the celebration of the 1050th anniversary of the Baptism of Poland with the participation of state authorities and the Papal legate. The Sejm of the Republic of Poland established the Polish Baptism Day in 2019.

Ostrów Lednicki belongs to the most important places related to the baptism of prince Mieszko I. The relics of palace and sacred buildings remain on the island on Lake Lednica to this day. In the palace chapel there are remains of two 10th century gypsum baptismal pools.

According to Professor Andrzej M. Wyrwa, the interest in Ostrów Lednicki strongly increased after the celebration of the 1050th anniversary of the Baptism of Poland.

'Since 2016, the number of visitors, tourists, has increased unbelievably. We have reached the number of 220,000 visitors per year, and remembered that the season lasts from mid-April to mid-October, in the remaining months access to the island is difficult. The pandemic slowed down the tourism slightly, but we still see increased interest', he says.

The museum director admits that this year he again counts on an increased number of visitors to the Museum of the First Piasts on Lednica. He reminds that soon visitors will be able to discover the history of the beginnings of Polish statehood throughout the year, as the reconstructed museum building is scheduled to open in June.

The approx. PLN 26 million investment is carried out thanks to the support of EU funds. The museum will gain an object with modern archaeological, conservation and science labs, a library and archive, educational, exhibition and storage rooms.

Professor Andrzej Wyrwa adds since the focus is currently on the ongoing investment, no special Polish Baptism Day celebrations have been planned this year.

'Our investment is another aspect where we feel this change of interest that started after the 1050th anniversary of the Baptism of Poland. We found sponsors who provided significant support. Thanks to them, we managed to secure funds for full equipment of this facility', he says.

According to Wyrwa, with modern infrastructure the museum will serve as a key scientific and exhibition centre associated with the beginnings of the Polish state, the Piast Dynasty and the beginnings of Christianity in Poland.

Referring to the discussions concerning the place of the historical event from over a thousand years ago, Wyrwa emphasises that recent research confirms that the baptism of Mieszko I took place on the island on Lake Lednica.

'The new physicochemical analyses carried out recently show that the bridges connecting the land with the island were completed in 965, before or specifically for the arrival of Doubravka of Bohemia. The palace and sacral building were built in a similar time', he explains.

Last year, researchers announced that research allowed to determine that the construction of the Palatium on Ostrów Lednicki started in the years 936-985.

'In the case of the objects in Poznań, we do not know the specific dates of their construction, and there is no specific object where the baptism could have taken place. The so-called Poznan baptism bowl is not really a baptism bowl, the Doubravka chapel could not have been be place of baptism. The only point on the map of Poland, where there are objects that we can bind with baptism pools, is Ostrów Lednicki. If the baptism took place in the Mieszko's domain, it was here. In science, we can not say that everything is certain, unambiguous, but current research allows us to formulate such conclusions', he adds.

The Polish Baptism Day on Ostrów Lednicki was celebrated at noon with the tolling of the 'Mieszko and Doubravka' bell consecrated by the Primate of Poland, Archbishop Wojciech Polak on 14 April 2016, 1050 years after the baptism of the first Polish ruler. (PAP)