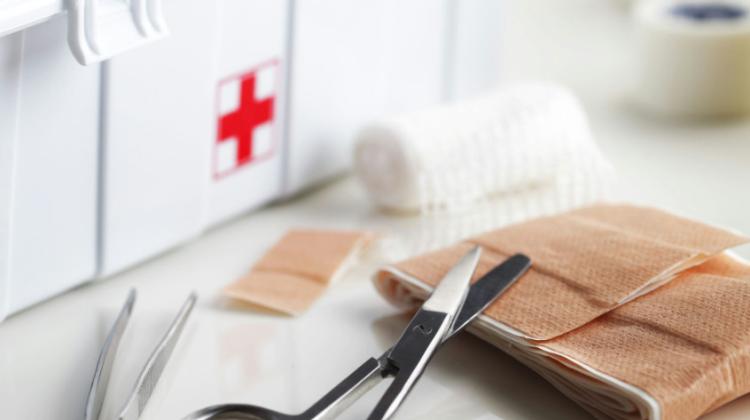 Prodigiosin, a blood-red dye, inhibits the multiplication of the staphylococcus bacteria and even destroys them. A dressing that uses of prodigiosin, developed at the University of Warmia and Mazury, can be used wherever it is impossible to quickly clean the wound.

Prodigiosin is a blood-red dye insoluble in water. It is produced by the bacterium Serratia marcescens. Professor Sławomir Ciesielski from the University of Warmia and Mazury in Olsztyn has devoted 10 years to the study of prodigiosin. In a release published on the university's website, he discusses the steps that brought him closer to discovering further properties of the red dye.

'Initially, I was interested in the fact that this dye specifically binds to the DNA of tumour cells, which means that it can be a potential cancer drug. Later, I found that prodigiosin also has strong antibacterial and antifungal properties. I was particularly interested in the fact that it inhibits the growth of gram-positive bacteria', explains Ciesielski, quoted in the press release.

Gram-positive bacteria include staphylococci, streptococci, tetanus rod, Mycobacterium tuberculosis and Mycobacterium leprae. Staphylococcus aureus and Staphylococcus epidermidis are common components of the bacterial flora on the skin. If the skin is healthy, nothing happens. However, if there is a wound, bacteria penetrate it and become dangerous. The resulting infection can even lead to death.

'Prodigiosin inhibits the multiplication of staphylococci and even destroys them. This property inspired us to develop a dressing added prodigiosin', Ciesielski says.

Professor Sławomir Ciesielski's scientific team, the members of which are Dr. Justyna Pozyjko-Ciesielska, a professor at the Department of Microbiology and Mycology at the Faculty of Biology and Biotechnology, and Martyna Godzieba, a doctoral candidate at the Department of Environmental Biotechnology, with the support of the Innovation Incubator, a program implemented at the University of Warmia and Mazury by the Centre of Innovation and Technology Transfer, developed a method of fractionation and binding selected prodigiosin fractions with the dressing .

Laboratory bacterial streaking tests have shown that Staphylococcus aureus and Staphylococcus epidermidis do not develop on dressings with prodigiosin.

In 2019, Professor Sławomir Ciesielski applied for patent protection to the Patent Office of the Republic of Poland. In the autumn of 2021, he was granted a patent for 'Prodigiosin production method and applying it to create a dressing antibacterial barrier'.

'Such dressings can be useful wherever there is no possibility to quickly clean the wound, for example in field conditions, especially during warfare. In such wounds, staphylococcus can develop after a few hours, which makes the treatment very difficult, and in extreme cases may even lead to infection of the entire body and the death of the wounded', says Ciesielski. He adds that the use of alternative antibacterial compounds is also important due to the growing problem of antibiotic resistance.

'The market will soon be dominated by antibacterial drugs, to which pathogens have not yet developed resistance', says Professor Sławomir Ciesielski.

The scientist announces that the team is looking for a business partner who would help prepare the dressing with prodigiosin for mass production.