Polish scientist honoured with stunning mural at university in Lima 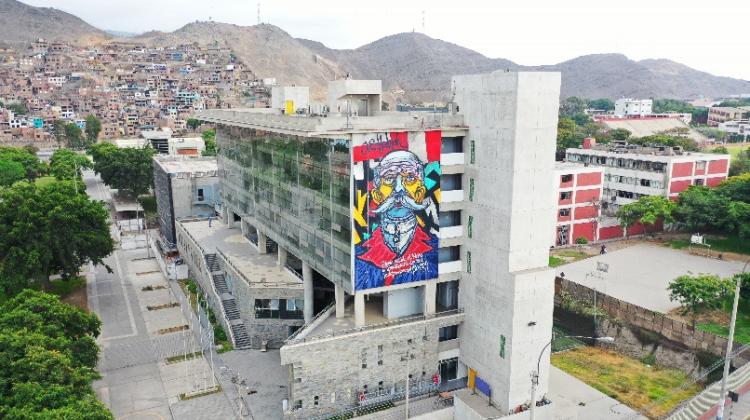 A massive mural of Polish engineer Edward Jan Habich has appeared at the university he founded in the Peruvian capital Lima.

Habich, who in addition to being an engineer was also a mathematician, January insurgent, political emigrant and Polish diaspora activist, is presented as a middle-aged man with typical Polish Sarmatian mustache, in a frock coat.

The Polish embassy in Peru said: “After Ernest Malinowski, Edward Habich is the second most recognizable and distinguished Pole with regard to building an independent Peru.

“Due to the versatility and effectiveness of his activities, despite the passage of decades, the memory of him is alive and he is respected to this day.”

Widely recognised as being his crowning achievement, the School of Civil Constructions and Mining Engineers, today Universdad Nacional de Ingenería, officially opened on July 23, 1876, and was the first technical university in the continent.

One of the best technical schools in Latin America to this day, the school educated over 500 first engineers from Peru, Ecuador, Bolivia and Colombia.

A Polish embassy spokesman said: “E. Habich managed it to his death, transforming the educational system in Peru, which for a long time was a model for neighbouring countries.”

Born on January 31, 1835 in Warsaw, Habich arrived in Peru after studying at one of the best technical schools of that time, the Parisian École Nationale des Ponts et Chaussées.

Having worked as the director of the Polish Higher School in Paris, he established scientific relations with many scientific, research and publishing institutions. In 1869, he signed a three-year contract with the Peruvian government and remained in the country for 40 years, until his death in 1909.

As a government engineer, in the first years of his stay in Peru he worked in the south of the country on regulating rivers and irrigation of desert areas in the region of Tarapaca and Arica (today Chile), and organizing the use of mountain water.

He was the author of projects of the hospital, church and bridges in Moquegua, launching the first railway line in the south of the country, and the initiator of the establishment of the Corps of Engineers, the Peruvian Charity Society, the Peruvian Geographical Society; first scientific periodicals and publishing houses.

The colours of the new mural, which was created by visual artist Rafał Roskowiński, are a reference to the paintings of his great-grandson, famous Peruvian abstractionist José Tola de Habich, who died in 2019.

Dr. Jędrzej Kotarski who commissioned the project said: “A murals is a modern means to convey ideas, thoughts and values. Currently it is particularly popular not only as a form of aesthetic expression, but above all the most effective and durable social communication medium. At the same time, it is a visually interesting form, accessible to a massive, diverse audience, conforming with the assumptions of public, historical and cultural diplomacy.”

The ceremonial unveiling of the mural is planned on July 18, to celebrate the 146th anniversary of the establishment of the UNI.