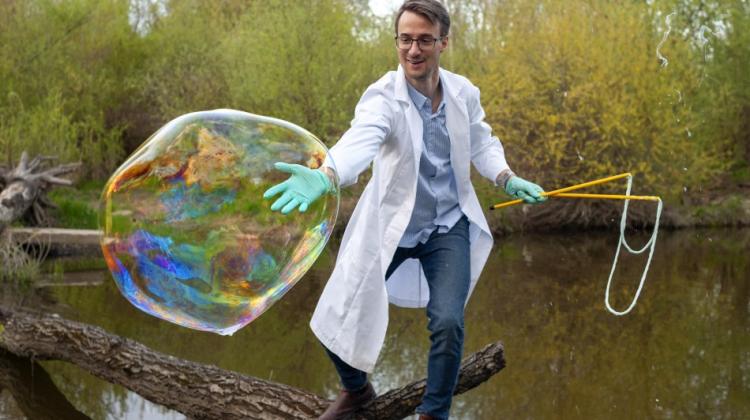 Molecules in liquids are in constant motion and can flow freely. However, even a drop or bubble can create complex structures that make scientists' heads spin. Photo: Grzegorz Krzyzewski

Water is a fantastic liquid that has inspired scientists for centuries, and despite intensive studies of its complex nature, it still evades full understanding. When two droplets are brought together, they eventually settle into each other, merging and forming a larger, yet simpler, structure—a bigger droplet, while uniformly mixing. The same happens in foams, where tiny bubbles connect and eventually form larger bubbles. These phenomena occur because water tends to minimize its surface energy. A new study conducted by researchers from the Institute of the Physical Chemistry, Polish Academy of Sciences, led by dr. Guzowski shows how droplets, instead of merging, unexpectedly form increasingly complex structures. Let's take a closer look at their discovery.

Physics surrounds us all the time. It is hidden even in the shape of bubbles in a coffee foam or in droplets running down the window on a rainy afternoon. Even though the behavior of bubbles or droplets at the macroscale is quite intuitive, at the micrometric or nanometric scales it often eludes simple understanding. The nature of liquids has been investigated for decades, while still the most common liquid we know, water, hides many mysteries that need to be revealed. Depending on the experimental conditions, aqueous droplets can attain different shapes and sizes or can even form puddles or ridges. However, what if someone, under some particular conditions, were to observe weird behaviors such as formation of droplet chains resembling the strands of DNA? Without researchers' deep investigation, such observation could probably be treated as an artifact in the ocean of measurements and as fast as observed it would be forgotten. After all, droplets or bubbles coalesce into globule-like structures rather than forming chains. However, it turns out that, when confined inside microfluidic channels, the chain-like structures persist long enough to allow deeper insight into their perplexing properties.

Recently, researchers from the Institute of Physical Chemistry, Polish Academy of Sciences, observed that the behavior of droplets becomes very peculiar in some cases. A group led by dr. Guzowski, in collaboration with researchers from Princeton University, recorded chains of droplets that self-organize into more complex linear structures when carried by an external flow. The researchers kept the droplets at a minimal distance in microfluidic channels and observed that the droplets started forming a linear chain instead of merging. The chain buckled and folded onto itself from time to time, forming a sequence of ‘folds’ and ‘strings’. Of course, such a state was rather delicate and did not last forever, as eventually all droplets aggregated and coalesced into a single blob of water. Yet, this intriguing observation of brief but complex chain-like structures may provide general insight into how and why well-defined ordered structures emerge from sequentially generated building blocks (the droplets) and how to control such states. In fact, the emergence of higher-dimensional structures form lower-dimensional ones is ubiquitous in nature: the shape of proteins, for example, is set by the linear sequence of their molecular building blocks, amino-acids.

Even though the formation of simple droplet chains was observed before, their folding has never yet been reported. To clarify the mechanism behind the particular stability of the folded droplet patterns, researchers from IPC PAS performed several measurements in the microfluidic device, where tiny droplets adhered to each other in the presence of a small amount of an oil phase. They recorded the formation of elastic connections between the aqueous droplets, called capillary bridges, thanks to which a range of the wire-like multi-droplet structures could be generated reproducibly for the first time.

“We have studied dynamic self-organization of droplets into stable granular threads, i.e., elongated structures achievable via interplay of capillary arrest and rearrangements. We have also investigated the limits of stability of the structures and established different dynamic regimes depending on the degree of confinement of the aqueous droplet ‘cores’ within an oil ‘shell’ which we controlled via tuning the flows” – claims dr. Jan Guzowski, a first author of the research.

The findings of researchers from ICP PAS have the potential for application in systems exploiting droplets as micro-bioreactors, like microfluidic devices for biomedical applications, where the droplets can be used as building blocks of increasingly complex microsystems. For example, when enriched with biopolymers, the droplets could be used as reinforcement for the growth of cells or even tissues, in other words, as scaffolds for tissue engineering. This technique could be used to control even thousands of droplets in tiny channels within seconds. As a result, it could be used to test drugs at high throughput, with multiple cell-encapsulating droplets serving as multiple tissue-probes or ‘copies’ of the same biological microenvironment.

Dr. Guzowski remarks “We believe that the structures reported in the current work could be further exploited in 3D cell culture, and as such find applications in personalized medicine, drug discovery or diagnostics. The currently available techniques of formulation of biomaterials containing cells suffer from rather low reproducibility and low throughput.”

In order to allow such advanced applications the delicate droplet structures need to be somehow stabilized. In fact, it turns out that the observed phenomena are not limited to water. The self-assembled structures can also be achieved using other types of soft granular systems, including microgels which may remain stable for hours, days or even months. And that is not the end! Further research by the scientists, soon to be published, also shows that the sequences of ‘folds’ forming along the chains are, to some extent, random and therefore may be used to encode and store information in a way similar to the DNA. With each droplet acting as a separate bioreactor loaded with different chemicals—e.g., drugs—the encoded structure could be used to 'label' and identify the various bioreaction conditions without using any additional chemical labels which could interfere with the tested drugs. For now, researchers, amazed and puzzled by their unexpected results, have begun investigating the more complex systems opening possibilities to implement their findings in everyday life.

This work was published at Soft Matter on15th February 2022.